“A Message Signed with Blood to the Nation of the Cross” 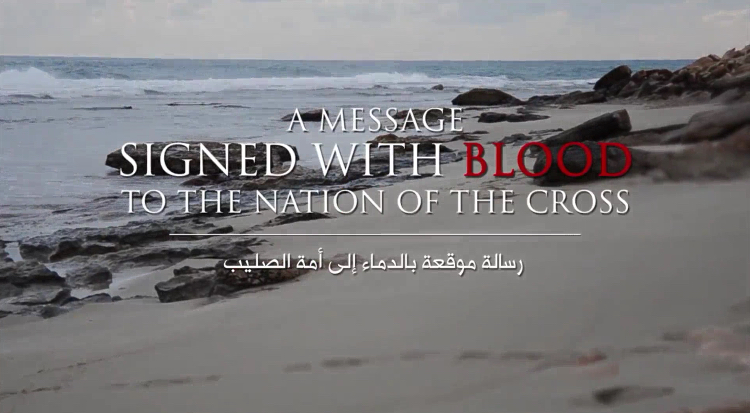 Posted at 11:36h in Understanding Islam by Mark Durie 0 Comments

This post is a analytical explanation of a film produced by Al-Hayat Media of the Islamic State,  which portrays the ritual slaughter of 21 Coptic Christians on a beach in Libya, in the film “A Message Signed with Blood to the Nation of the Cross”.  Words in blue are from the film, either in the form of titles or sub-titles, or as narration.  Text in red is for the words of Muhammad or the Qur’an.  This is Part 2 of a pair of posts about this film.  Part 1 is Bearing the cross: a letter to the Islamic State.

The people of the cross, the followers of the hostile Egyptian Church

The opening scenes show the 21 men being led along the coast towards the camera, each one held by a hooded captor.

All praise is due to Allah, the strong and mighty, and may blessings and peace be upon[1] the one sent by the sword[2] as a mercy for all the world[3].

[1] It is a standard Islamic text opening to bless Muhammad.

[2] In this case Muhammad is identified as the ‘one sent by the sword.’ This phrase is taken from Muhammad’s own words:

“I have been sent with a sword in my hand to command people to worship Allah and associate no partners with him. I command you to believe and subjugate those who disobey me.”  Subhi al-Salih, ed., Ahkam Ahl al-Dhimmah vol 2: 736.  Also cited by (Ibn Taymiyyah in  Majmu’ Al-Fatawa (Vol. 28, p. 270).

Oh people, recently you have seen us on the hills of as-Sham [Syria] and on Dabiq’s plain,[4] chopping off the heads that have been carrying the cross delusion for a long time, filled with spite against Islam and Muslims[5].

[4] Dabiq is a town in northern Syria. In Islamic eschatology it is believed to be a place of battle between Christians and Muslims.  For this reason Dabiq was chosen as the title for the Islamic State’s propaganda magazine.

[5] The idea that Christians have enmity against Muslims is from the Koran:

Sura 60:4 “…enmity and hatred have appeared between us and you forever until you believe in Allah alone”

Sura 86:15 “Surely, the disbelievers are your ardent enemies.”

Sura 3:119 “O ye who believe! Take not others than your own people as intimate friends; they will spare no pains to ruin you. They love to see you in trouble. Hatred has already shown itself through the utterances of their mouths and what their breasts hide is greater still.”

And today, we are on the south of Rome, on the land of Islam, Libya, sending another message. “Oh Crusaders, safety for you will only be wishes,[6] especially when you are fighting us all together.[7] Therefore, we will fight you all together,[7]  until the war lays down its burdens[8] and Jesus, peace be upon him, will descend, breaking the cross, killing the swine and abolishing jizya.[9]”

These few lines are packed with references to Islam’s canonical texts.

[6] Muhammad famously told the Jews of Medina aslim taslam ‘convert/surrender (to Islam) and you will be safe’.  By this logic, those who refuse to convert to Islam can never be safe.

[7] Sura 9:36 “… fight the polytheists all together as they fight you all together”. This verse comes hot on the heels of 9:29 which is the key verse in the Koran to support the subjugation of Christians under Islam’s yoke.  The Arabic word for ‘fight’ here actually means ‘fight to kill’.

[8] Sura
47:4 “And when you meet in battle those who disbelieve, smite their necks [i.e. behead them]; and, when you have overcome them, by causing great slaughter among them, bind fast the fetters – then afterwards either release them as a favour or by taking ransom – until the war lays down its burdens.”

[9] Muhammad said “Isa (Jesus) … will fight the people for the cause of Islam. He will break the cross, kill swine, and abolish jizyah. Allah will perish [destroy] all religions except Islam.” (Sunan Abu Dawud, Book of Battles).  According to this well-known tradition of Muhammad, Isa the Islamic Christ will destroy Christianity, and kill anyone who does not submit to the sharia of Muhammad.  In Islamic law the abolition of jizya means the end of tolerance for non-Muslim religions. After Jesus’ return, all humanity will be given only two choices: Islam or death. These Christians in Tripoli are being killed  in anticipation of this end-times principle.

And the sea you have hidden Shaikh Usama Bin Laden’s body in, we swear to Allah, we will mix it with your blood.

The principle of qisas or retribution is at play here: just as Bin Ladin was buried at sea, so Christians will have their blood spilled into the ocean.   Cf. Sura 2: 190-94 “fight in the way of Allah those who fight you … slay these transgressors wherever you meet them and derive them out from where they have driven you out … if they fight you, then fight them …  if they violate the prohibition, then you may do the same in retaliation” And also Sura 16: 126 “retaliate with an equivalent punishment”.

The same motivation influenced the burning alive of the Jordanian pilot: because his bombs had caused people to die in burning buildings, so it was considered permissible to burn him.  See here.

The principle of qisas also accounts for the standard Guantanamo Bay-style orange jumpsuits supplied to the beheading victims.  This is saying: “we are humiliating you as you humiliated us at Guatanamo.”

The worldview of qisas is not limited to the Islamic State. Jordan and Egypt cited the same principle when executing prisoners and launching bombing raids in response to IS atrocities.

They supplicate what they worship and die upon their paganism.

As the victims are being forced down, first to kneel, and then to lower their heads into the sand, the subscription declares that they are ‘supplicating’ i.e. down on their knees to worship, and dying for the sake of their religion, which is their pagan ‘worship’.  As they go down, a number of the men can be seen calling on the name of Jesus.

This textual inscription is designed to humiliate the victims and make crystal clear to other Christians that these men are being killed for their faith.  The manner of their death is also an enactment of the false worship they are charged with: they are compelled to bow down, as if to an idol, but they are going down to their deaths.  This ritual is communicating, “Because you have bowed down to a false god, you will now bow down to your death.”

This filthy blood is just some of what awaits you, in revenge for Camella and her sisters.

Camilla Shehata is a Coptic woman, the wife of a Christian priest, who went missing.  Her husband reported her missing to the police fearing that she had been kidnapped by Muslim men, who regularly kidnap, rape and forcibly convert Christian women in Egypt, all too often with the collusion of the authorities.  Kidnappers are known especially to target the wives of priests.  Later Camilla appeared on national television to state that she had just gone to be with relatives after a domestic dispute and she had not converted to Islam.  However the Muslim public in Egypt was not to be placated.  It was incited by Muslim leaders with the idea that she had converted to Islam, and the Coptic church, having kidnapped her, was torturing her to force her back into Christianity. This libel against Egyptian Christians was also made in connection with other Coptic women.

This is a case of projection. Muslims have captured hundreds of Coptic girls and women in recent years (see here and here) compelling them through threats and violence to accept Islam and give false testimony that the have entered Islam willingly.  There is normally no recourse for the families of the captive females. The families are simply told that the women have converted to Islam and are now married, and their new husbands can speak for them, in accordance with Islamic law. (See my book The Third Choice, p.163ff for a theological explanation of why non-Muslim women are especially vulnerable to rape and capture in Islamic conditions.)

The massacre of congregants in the Baghdad Catholic cathedral on October 31, 2010 was also claimed by the Al Qaida perpetrators to be retribution for Camilla.

The idea of revenging Camilla by killing random Coptic men is another example of a theological tendency among Islamic radical to promote collective punishment for the People of the Book.  The Moroccan jurist Al-Maghili wrote concerning the dhimma pact of ‘protection’ for non-Muslims, “The fact that one individual (or one group) among them [i.e. the non-Muslims] has broken the statute is enough to invalidate it for all of them”.

We will conquer Rome, by Allah’s permission, the promise of our prophet, peace be upon him.

This boast signifies the final destruction of the fifth of the four original centres of the church. The others, already overrun by Islam, are Constantinople, Antioch, Jerusalem and Alexandria.

The film ends with a close-up of the blood-red water of the ocean: the signature in blood.