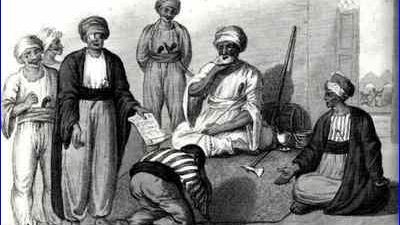 Posted at 08:56h in Understanding Islam by Mark Durie 0 Comments

In sharia law, jizya refers either to tribute paid by non-Muslim nations to ward off jihad attack, or to a head tax paid by conquered non-Muslim adult males living under Islamic conditions.

Fight in the name of Allah and in the way of Allah.
Fight against those who disbelieve in Allah. Make a holy war …
When you meet your enemies who are polytheists, invite them to three courses of action.
If they respond to any one of these, you also accept it and withhold yourself from doing them any harm.
Invite them to (accept) Islam; if they respond to you, accept it from them and desist from fighting against them ….
If they refuse to accept Islam, demand from them the Jizya.
If they agree to pay, accept it from them and hold off your hands.
If they refuse to pay the tax, seek Allah’s help and fight them.
(Sahih Muslim. The Book of Jihad and Expedition. (Kitab al-Jihad wa’l-Siyar). 3:27:4294.)

Why wage war? The Muslim jurists agree that the purpose of fighting the People of the Book … is one of two things: it is either for the conversion to Islam or the payment of the jizya. The payment of the jizya is because of the words of the Exalted, ‘Fight against such as those who have been given the Scripture as believe not in Allah or the Last Day, and forbid not that which Allah and His Messenger hath forbidden, and follow not the religion of truth, until they pay the tribute readily being brought low.’ [The Qur’an, Sura 9:29]. (Bidayat al-Mujtahid wa Nihayat al-Muqtsid, The Distinguished Jurist’s Primer).

The Arabic word jizya means ‘compensation’ or ‘reparations’. The  root j-z-y refers to something provided as a compensation or satisfaction, instead of something else.  Muslim lexicographers defined jizya as a tax taken from non-Muslims ‘that ensures their protection, as though it were a compensation for their not being slain’. (E. W. Lane, An Arabic-English Lexicon).

Paying jizya is a long-standing US tradition.  As soon as it won independence from Britain, and recognizing that its ships were no longer protected by British naval power, the US began to send tribute to the Barbary states.  The first appropriation by Congress was made in 1784 was for $80,000, and in 1795 the US government paid a million dollars in cash, naval stores and a frigate to ransom 115 kidnapped soldiers from Algiers (America and the Barbary Pirates: An International Battle Against an Unconventional Foe by Gerard W. Gawalt).  In that year, total US government revenue was six million dollars.

There was a period at the start of the 19th century when the US government was consistently paying over 10% of US revenue in jizya to the Barbary states to prevent further jihad attacks against US ships.  An equivalent proportion of US Government revenue today would amount to hundreds of billions of dollars, or more than the annual cost of the Iraq and Afghanistan wars combined.  The US Navy was created in 1794 to address this challenge.  Gerard W. Gawalt writes:

In fact, it was not until the second war with Algiers, in 1815, that
naval victories by Commodores William Bainbridge and Stephen Decatur led
to treaties ending all tribute payments by the United States. European
nations continued annual payments until the 1830s.

In The Third Choice  (pp.212-213) I questioned whether aid given by Western states today might  be considered by some Muslims to be ‘jizya’.  I meant by this that aid would not be received as a generous gift from a friend, but something taken as a right, a payment compensating a potentially violent aggressor:

Aid or Jizya?
One can also ask some troubling questions about the flow of funds from Western governments to organizations and nations which are committed to Islamization. This includes what is known as ‘international aid’, but might just as easily be called tribute. Some of the largest aid grants from the USA and the European Union have been going to Islamic communities which are producing large numbers of radicals, such as Egypt and Pakistan. Professor Moshe Sharon, emeritus Professor of Islam at the Hebrew University in Jerusalem has written:

… the billions of dollars which stream from the EU to Muslim terror groups under various disguises are nothing less than Jizyah money paid by the dhimmis of Europe to the Muslim rulers. … European money is the collective Jizyah paid by the Europeans in the (false) hope that it will secure for them the protected status of the dhimmi.

It is an irony that clerics funded by the Palestinian Authority, who live off European and US aid, have denounced Western governments on Palestinian Television, declaring the inevitable victory of Islam over the whole world. For example, Sheikh Muhammad Ibrahim al-Madhi, a Palestinian authority employee, preached a sermon broadcast on PA Television on April 12, 2002, in which he prophesied the defeat of every nation on the earth:

Raymond Ibrahim has drawn our attention to a Salafist cleric’s recent pronouncement on Egyptian television that US aid to Egypt should indeed be considered as jizya:

According to the sheikh, Egypt must be less cooperative with the U.S. and at the same time insist for more monetary aid.  If so, the sheikh believes that “America will accept; it will kiss our hands; and it will also increase its aid.  And we will consider its aid as jizya, not as aid.  But first we must make impositions on it.”

When the host asked the sheikh “Do the Americans owe us jizya?” he responded, “Yes,” adding that it is the price Americans have to pay “so we can leave them alone!”  When the host asked the sheikh if he was proclaiming a fatwa, the latter exclaimed, “By Allah of course!”  The sheikh added that, to become a truly Islamic state, Egypt must “impose on America to pay aid as jizya, before we allow it to realize its own interests, the ones which we agree to.”

While the Egyptian cleric was focused on “international jizya”—that is, money paid by one non-Muslim nation to a Muslim nation, U.S money to Egypt—other Muslims have been receiving and enjoying individual “jizya” from Western, infidel governments, in the form of welfare aid.

Just last February, for example, Anjem Choudary, an Islamic cleric and popular preacher in the United Kingdom, was secretly taped telling a Muslim audience to follow his example and get “Jihad Seeker’s Allowance” from the government—a pun on “Job Seeker’s Allowance.” The father of four, who receives more than 25,000 pounds annually in welfare benefits, referred to British taxpayers as “slaves,” adding, “We take the jizya, which is our haq [Arabic for “right”], anyway. The normal situation by the way is to take money from the kafir [infidel], isn’t it? So this is the normal situation. They give us the money—you work, give us the money, Allahu Akhbar [“Allah is Great”]. We take the money. Hopefully there’s no one from the DSS [Department of Social Security] listening to this.”

This issue – of Western aid being interpreted as tribute and a rightful due – is part of a broader problem of interactions between Muslims and non-Muslims.  In The Third Choice I discussed this in the context of Christian-Muslim interactions, but the issue affect non-Muslims in general:

In submitting to the requirement of grateful service to Islam, Christians may well interpret their own submissiveness in gospel categories of forgiveness and service, but from the Islamic side this can just look like the program of Islam as ‘submission’ is working. Muslims can often interpret such submissiveness as Islam’s rightful due, not an expression of grace, and even allow themselves to feel generous in accepting this service. For this reason, Christians involved in partnering with Muslims should make every effort to understand the theological grid which dhimmitude would seek to impose upon the relationship, and while continuing to be gracious, back up the grace with a strong admonition to reciprocity.

The issue here is not so much whether Muslims will misinterpret the motives of Christians. It is rather the danger of a politico-theological framework being imposed upon the Christian-Muslim relationship, to conform it to the requirements of dhimmitude…  (The Third Choice, p.223)

The Egyptian Salafist Sheikh was giving voice to a mindset which is real and widely held.  Western donors  to the Muslim world need to be alert to the potential for aid to be regarded as a ‘right’ from the Muslim side.  According to this mindset, recipients of modern-day ‘jizya’ could respond with more belligerence – and not friendship – to extract even more resources from the infidels.

Aid or jizya – the difference is crucial.  Aid is a gift to friends.  Jizya is an act of surrender .  Western donors should be most wary of making military
donations to sharia-compliant states.  In 2013 US aid to Egypt will amount to c. 1.5 billion dollars, most of which will be military hardware.  One of the traditional uses of jizya by Islamic states is to fund further jihad, so belligerence can extract more jizya.  It is completely understandable that US lawmakers are seeking to restructure US Aid to Egypt.

Given that Egypt is now governed by the Muslim Brotherhood, US should not be sending a single item of military hardware Egypt’s way.  Instead it should start forwarding desperately needed food aid (and see here), with ‘US AID’ stamped in large letters on the
parcels.