Christians are ‘asking’ to pay jizya: reflections on the Islamic State 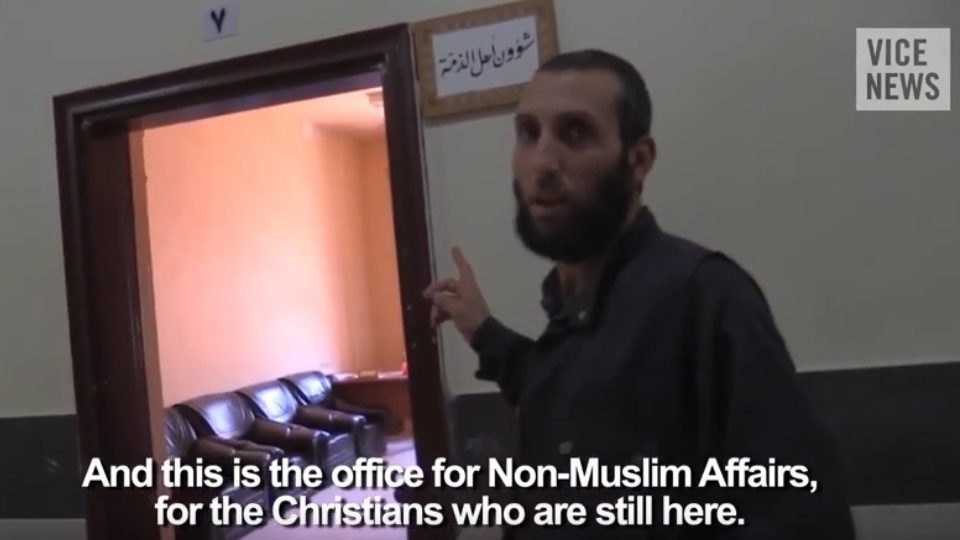 15 Aug, 2014 Christians are ‘asking’ to pay jizya: reflections on the Islamic State

Posted at 19:19h in Understanding Islam by Mark Durie 0 Comments

An important documentary by VICE News was published in 2014 which used extensive footage gained by a journalist embedded with Islamic State forces.  A video was published which from 29m 58s includes a section in which it was reported that Christians had asked for a dhimma pact, requesting to pay jizya.

There are many noteworthy things about this documentary.

One is the intensely theological content of the IS fighters and leaders.  Their speech is littered with references to the Qur’an, the Hadiths (traditions of Muhammad) and the Sira (biography of Muhammad).  This shows that the jihadis’ worldview is profoundly shaped by Islam’s scriptures. Islam is their driving motivation, determining – at least in their eyes – the boundaries of their behavior, their goals, and their morality. Whatever else Muslims find in Islam’s scriptures – including words of peace or reconciliation – it is abundantly clear that the Qur’an and Sunna are more than adequate to sustain the ideological base which drives the IS actors.  This conforms to the pattern of other jihad wars throughout the history of Islam.

Another notable feature of this documentary is joy;  the joy of the jihadis; the joy of local Muslims about the caliphate; the joy of young boys who are being recruited to become jihadis for the Islamic State.  The Islamic State is being established on a wave of the pious, exuberant joy of its supporters.  Islamic State soldiers do not suffer from morale-sapping doubts about what they are doing. They believe they are making great sacrifices to what they consider to be the noblest of causes.  If morale were enough to guarantee victory, these men would sweep all before them.

Another thing that struck me about the documentary is the reality that the Islamic State is intentionally gathering young boys, grooming them, and placing them in training camps to become a  jihad generation.  Some of the youth who appeared in the documentary were full of excitement and anticipation about this.  The current Islamic State fighters have been drawn from all over the Muslim world, including from Western states, and are bound together by their creed.  Now that they are establishing themselves in Iraq and Syria, they are raising up a jihad generation from the sons of the local people.  Judging from the pattern established by Muhammad’s example, these boys will include young Christians who have been converted to Islam by the jihadis and are even now being trained for war.  This is consistent with the practice of jihad campaigns down through history.

Another thing that struck me was the undercurrent of fear.  One jihadi declared that weapons are the best way to establish Islam.  The Islamic State jihadis consider it perfectly righteous to impose Islam by force, which means through fear.  This is, in their view, Allah’s way.  I was reminded of the words of the Qur’an:  “I will strike fear in the hearts of the unbelievers” (Sura 8:12); “If you come upon them in war, deal with them so as to strike fear in the hearts of those who are behind them” (Sura 8:57); “Soon we shall strike fear into the hearts of the unbelievers” (Sura 3:151); and Muhammad’s own words “I have been victorious through terror” (Sahih Bukhari).  Fear was etched onto the smiling faces of men, interviewed in prison, who were awaiting sentence by an IS sharia court.  As they eagerly praised the Islamic State, and confessed their gratitude for being brought to a correct understanding of Islam, their own fear was standing in the background, monitoring everything they said.

An IS leader made the memorable claim that Iraqi Christians have asked to pay the jiyza. They have asked, he said,  for a dhimma pact – the alternatives were to convert to Islam or be slaughtered.

The idea that the dhimmi status is willingly accepted by Christians and other non-Muslims living under Islamic rule – that they want and choose to be dhimmis – is reflected in the statements of many jurists and Islamic commentators from the past.

Here is what I wrote about the ‘willing’ submission of dhimmis in The Third Choice (pp. 140-141), in a discussion of the annual Islamic jizya payment ritual, in which non-Muslim men of past generations received a ritual blow on the neck to symbolize their escape from beheading through paying the non-Muslim tax.

“The 18th century Moroccan commentator Ibn ‘Ajibah said that [paying jiyza] represented the death of the ‘soul’, through the dhimmi’s execution of their own humanity:

[The dhimmi] is commanded to put his soul, good fortune and desires to death. Above all he should kill the love of life, leadership and honor. … [He] is to invert the longings of his soul, he is to load it down more heavily than it can bear until it is completely submissive. Thereafter nothing will be unbearable for him. He will be indifferent to subjugation or might. Poverty and wealth will be the same to him; praise and insult will be the same; preventing and yielding will be the same; lost and found will be the same. Then, when all things are the same, it [the soul] will be submissive and yield willingly what it should give. [Tafsir al-Bahr al-Madid fi Tafsir al-Quran al-Magid. Commentary on Sura 9:29 ]

The intended result of the jizya ritual is for the dhimmi to lose all sense of his own personhood. In return for this loss, the dhimmi was supposed to feel humility and gratitude towards his Muslim masters. Al-Mawardi said that the jizya head tax was either a sign of contempt, because of the
dhimmis’ unbelief, or a sign of the mildness of Muslims, who granted them quarter (instead of killing or enslaving them): so humble gratitude was the intended response:

The jizya, or poll tax, which is to be levied on the head of each subject, is derived from the verb jaza, either because it is a remuneration due by reason of their unbelief, for it is exacted from them with contempt, or because it amounts to a remuneration because we granted them quarter, for it is exacted from them with mildness. This origin of this impost is the divine text: ‘Fight those who believe not in God …’ [Q9:29] [Al-Ahkam as-Sultaniyya]

Although some today falsely claim that the jizya tax was simply a tax like any other tax, or merely a payment to exempt dhimmis from ‘military service’, the remarks of al-Mawardi and Ibn ‘Ajibah make clear that its true meaning is to be found in psychological attitudes of inferiority and indebtedness imposed upon non-Muslims living under Islam, as they willingly and gratefully handed over the jizya in service to the Muslim community.”

Many have claimed that Islam’s historical record has been maligned by ‘Orientalist’ western historians.  To understand the dynamics of jihad across the generations, and the meaning in Islam of  Al-Futuh ‘conquest’ (literally:  ‘the opening’ of a nation to Islam) one only need look at what the Islamic State is doing in Iraq.

What about the future?

Finally, let us consider the future.  I venture to make a few predictions.  The lack of air power of the Islamic State means that it cannot sweep all before it.  Nevertheless it is here to stay.  The movement will continue to excite the Muslim world and draw recruits to its cause, as well as funding.  It will also continue to destabilize surrounding states.

The utopian promises the Islamic State has made to Sunni Muslims under its rule will prove in the end to be a profound disappointment to almost everyone.  Prosperity, morality and justice will not flourish under the rule of the caliphate.  The application of unfettered power, together with abuses of that power under strict Islamic conditions will corrupt the utopian rule, and will turn the current euphoria into a symphony of pain, including for Sunni Muslims.  Force can win power, but it cannot make people good, despite what the jihadis believe.  As in Iran, revivalist fervor will eventually give place to cynicism and despair about Islam itself, so the on-going crisis within Islam, namely the failure of revivalist movements to deliver on their utopian promises, will continue to unroll.

The most vehement rejectors of Islamic utopianism will eventually be the Muslims who have had the misfortune to live under the regimes it has created.  We are already seeing the outworking of this process in Egypt and Iran.  At the same time, it will be in the West that Islamic utopian sentiment, with all its dangers, will continue to thrive, for this will be the place where revivalist Muslims do not have to actually live under the conditions created by their ideal of a strict Islamic state.  For this reason it will be in the West that many will persist in remaining true believers in the coming Islamic world order, despite what is happening before their eyes across the Middle East.

The tragedy for the areas now occupied by the Islamic State is that the loss of the dream will take years, and in the meantime the rising jihad generation will kill and be killed in large numbers.

What is also certain is that the refugees will continue to come.  For now the ones fleeing the Islamic State are Christians and others for whom radical Sunni rule is an existential threat.  In time however the disillusioned Sunnis of northern Iraq and Syria will make their own exodus.  Just as post-revolutionary Iranian Shi’ites are now fleeing Iran’s failed sharia utopia, so also will the Iraqi Sunnis.  They will want a better life than the Islamic State can offer.

dhimma – covenant or pact of surrender, by which a conquered non-Muslim community have agreed to live under Islamic rule, and by virtue of which this community is protected from jihad

dhimmi – a non-Muslim living under Islamic rule, who is considered to be subject to the conditions of a dhimma pact

hadith – traditions, first spoken and later written, which
record things which Muhammad is believed to have said or done, as well
as things said and done by his companions

jizya – tribute paid to Muslims to prevent jihad attack; for dhimmis this is payable as an annual ‘head tax’ by adult dhimmi males

Qur’an – Allah’s revelation to Muhammad, believed to be dictated to him by the angel Jibril (Gabriel); also spelled Quran or Koran

Sunna – the example and teaching of Muhammad, recorded in hadith and sira literature; the word sunna also means religiously recommended