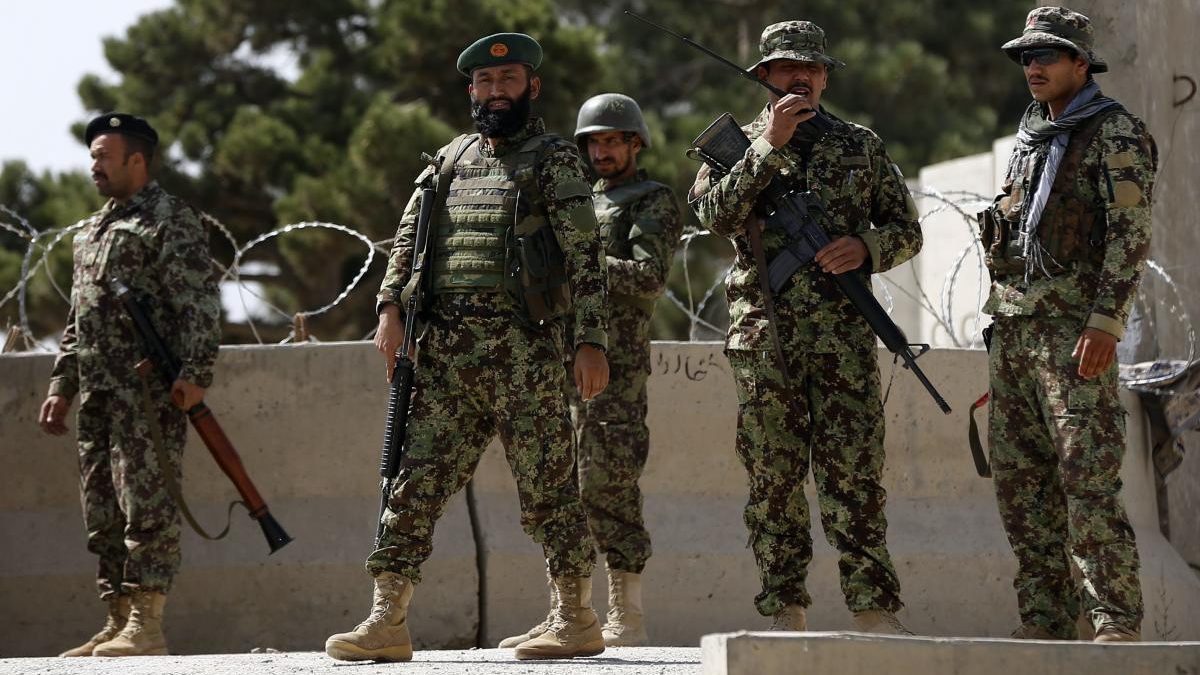 Posted at 05:42h in Understanding Islam by Mark Durie 0 Comments

In the past two weeks at least nine Americans have been killed by their Afghan allies in what is known as ‘insider killings’.  Members of the Afghan army, having been trained and armed by NATO forces, are turning their weapons in increasing numbers against their foreign allies, killing at least 40 NATO troops this year so far.

These killings are demoralising, not only for the troops, but also for the folks back home.  They make people war-weary.  Mrs Marina Buckley, the mother of Lance Corporal Gregory Buckley who was killed by one of his Afghan allies just before he was due to return home, spoke for many when she said: “Our forces shouldn’t be there.  It should be over. It’s done. No more.”

The generals seem to be mystified, for Colonel Lapan, spokesman for the US Joint Chiefs of Staff commented, “we don’t know what’s causing them, and we’re looking at everything.”

They could also look at Islam, and at history.

Let us wind the clock back 120 years to Aceh, today part of Indonesia.  In 1892 the sultanate of Aceh, a staunchly Islamic region, had been under Dutch military occupation for twice as many years as the Americans have been in Afghanistan.  When the Dutch first stormed the Acehnese capital Kutaraja (now Banda Aceh) in 1871 they naively assumed that control of the rest of the countryside would quickly follow. Instead they became entangled in a conflict which lasted for decades.

A poignant legacy of the Aceh-Dutch war is a military cemetery in Banda Aceh, reputed to be the largest graveyard of Dutch troops outside Holland.

As the decades passed, the Acehnese waged a tenacious insurgency from jungle hideouts, and Dutch leaders cycled through various theories to explain their military failures.  One theory was that the passing of time would see a steady reduction in hostilities.  Time did pass, and this theory ended up in the trash.  Another theory was that a ‘concentration line’ of forts could effect a safe haven around the capital to guarantee security, but the attacks continued.

A particularly demoralising aspect of the conflict was a pattern of Acehnese allies turning against and killing Dutch soldiers.  Teuku Umar was an early leader of the Acehnese resistance who became an ally of the Dutch, as a result of which he was rewarded with weapons, money and command of hundreds of troops.  Then he turned these weapons and troops against his supposed ‘allies’, inflicting heavy casualties.  The Dutch regarded this as an odious betrayal, yet today the name of Teuku Umar is recognized as one of Indonesia’s greatest heroes and boulevards all over the country are named after him.

The problem of deceipt and betrayal was also a rank-and-file problem.  There was no shortage of would-be Acehnese martyrs who, for the sake of gaining a victim, were willing to feign friendship with the Dutch, before drawing their knives against them.  The phenomenon of unpredictable killings by the Acehnese came to be known as Atjèh-moord ‘Acehnese murder’.

The failure of Dutch military policy in Aceh – and the resulting drain of Dutch blood and treasure – caused a host of political difficulties for governments back in Holland.  The war became intensely unpopular.

The turning point in the Aceh-Dutch war came in 1891-92 when Christian Snouck Hurgronje, an expert in Arabic and Islam, was sent to do field research into ‘the pernicious Aceh Question’ (het verderfelijke Atjeh-questie).

Snouck Hurgronje was the preeminent Western expert on Islam of his generation.  After completing a PhD on Islamic theology in Holland, he spent a year in Mecca in 1884-85, living as a Muslim, studying at the feet of the Sheikhs, and making a special study of Indonesian Muslims.

After his field trip to Aceh, Snouck Hurgronje published a two-volume report on the Acehnese society in 1893, which included a military analysis, and offered a blueprint for winning the insurgency.

At the heart of Snouck Hurgronje’s explanation of the ‘Aceh Question’ was a theological analysis.  The Acehnese war, he explained, was jihad, a theologically motivated struggle against the Dutch as infidel-occupiers of Islamic territory.

Because it was a theological struggle, grounded in the deeply held Islamic convictions of the Acehnese people, the Aceh war could not be won by capturing a few key cities or neutralising a handful of key leaders.  Indeed, as time passed, and the early chieftain leaders were superseded, the insurgency came to be dominanted by clerics, whose influence greatly increased as a result of the jihad.  (This same pattern can be observed in Afganistan over the past decade.)

Snouck Hurgronje’s thesis was rejected by many when it first saw the light of day.  In time however, it proved triumphant, and provided the basis for the successful pacification of Aceh.  It was only when the Dutch authorities aligned their military strategy with Snouck Hurgronje’s insights that they began to win the war.  Military success came as a huge relief to the Dutch authorities, and meant that by 1902 Snouck Hurgronje was able to write, “Now no one any longer doubts that the dogmas of Islam on the subject of religious war, so fanatical in their terms, supplied the principal similes to the obstinate rebellion.”  (However individual acts of ‘Acehnese murder’ did continue – albeit in significantly decreasing numbers – right up until the Japanese occupation in 1942.)

The theological framework for the Acehnese jihad, which Snouck Hurgronje exposed to the understanding of Dutch leaders in 1893, happens to be exactly the same as that used by jihadi scholars such as Abdullah Azzam in the late 20th and early 21st centuries to stimulate what western elites refer to as ‘terrorism.’

It is a classical dogma of Islam that when Muslim lands are occupied by infidel forces, it is an individual religious obligation upon all Muslims to do their utmost to defend their lands against the infidels.  This belief drove the Acehnese insurgency over a century ago, and it drives the Afghan conflict today.

Snouck Hurgronje also explained that the practice of deceit – manifested in feigned friendship leading to what we would now call ‘insider killings’ – can be derived from the dogmas of Islam and specifically from religious attitudes to infidels.

It is disappointing that after a more than a decade of war, the US Joint Chiefs of Staff are mystified by the phenomenon of ‘insider killings’. Has political correctness so neutered their capacity to wage war?  Are they so blind to the religious nature of the war they are fighting?  How can they be unfamiliar with the classical dogmas of jihad, which make it a compulsory religious duty for individual Muslims to fight against infidel occupiers of Muslim lands?

The US generals, indeed any army fighting a jihad insurgency in Muslim lands, would do well to read read Snouck Hurgronje’s report, especially volume I (see here).

The insider killings of Afghanistan today are essentially the same phenomenon as ‘Acehnese murder’ of over a century ago. The straightforward, rational explanation for Afghan soldiers turning their US-supplied weapons against their ‘allies’ can be found in the beliefs outlined by Snouck Hurgronje in the late 19th century: the dogma that Muslims have a duty to defend Muslim lands against infidel occupation; the dogma that if Muslims are killed in jihad, paradise will be their reward; and the dogma that in jihad, deceiving the infidel is no sin.

Reuters has reported that in Afghanistan:

“Field commanders have also been given discretion to increase numbers of so-called “guardian angel” sentries who oversee foreign soldiers in crowded areas such as gyms and food halls, to respond to any rogue shooting incidents.”

This is reminiscent of remarks by the Acehnese poet Anzib Lamnyong, reflecting on the assassination of a Dutchman by Lém Abah, an Acehnese man from his own village:

“Very often people attacked the Dutch like that, so that the Dutch had to keep a very close guard on Banda Aceh, night and day, all around the whole city.  But no matter how well those guards kept watch, they still kept getting attacked by our people, who would strike them down …  The Dutch were in great consternation about our brave people, who did not fear the bullet that might strike them dead in the twinkling of an eye.”

One expects that, when the last infidel troops have left Afghanistan, and Muslim sovereignty has been fully restored, the memory of the Afghan jihadis who are even now perpetrating ‘insider killings’ may come to be held in high renown, just as the name of Teuku Umar is revered in Indonesia to this day.