Ishmael is not the Father of the Arabs 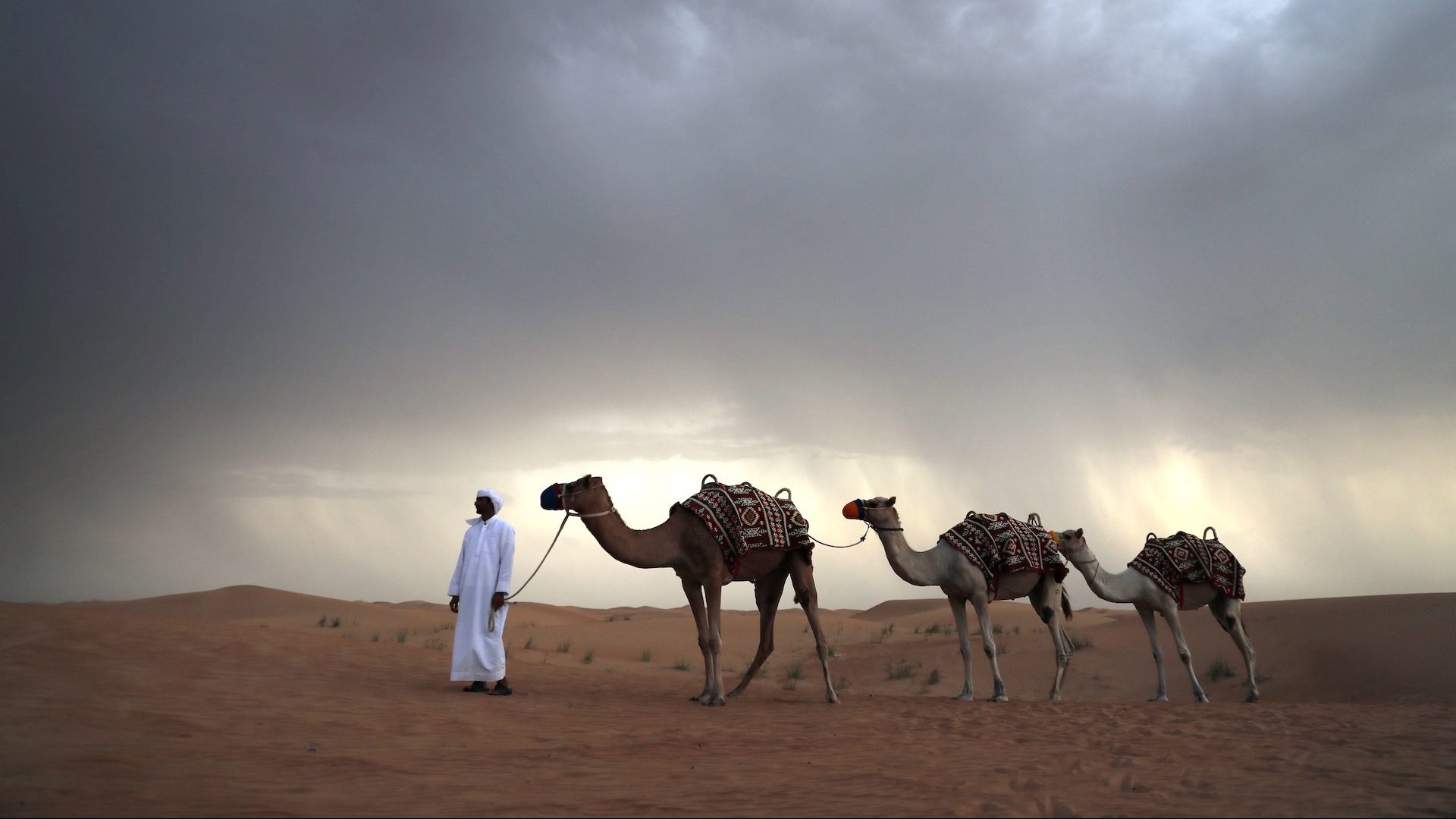 The commonly held view that Ishmael was the father of the Arab nations is not supported by the Bible, nor by other historical evidence.

For centuries, many Muslims, Christians and Jews have taken it for granted that the Arabs descended from Abraham through Ishmael. As Gerald Hawting put it:

“The idea that the Arabs are the physical descendants of Abraham through Ishmael is indeed taken by many, non-Muslims as well as Muslims, as a genealogical and historical fact.”

Authors and teachers often treat the word Ishmael as a kind of code for Islam or Muslims. Examples of book titles which reflect this are Faisal Malick’s Here Comes Ishmael, a call to Christians to reach out to Muslims, Martin Gilbert’s In Ishmael’s House, a history of the Jews under Islam, and Israel and Ishmael: Studies in Muslim-Jewish Relations, edited by Tudor Parfitt. In the same vein, and over a thousand years ago, John of Damascus, writing after the conquest of Syria by Muslim armies, wrote a treatise on Islam called The Heresy of the Ishmaelites.

Grist for the Preacher’s Mill

Many Christian teachers have looked to Genesis for prophetic anticipations of the trajectory of the Arabs and of Islam. On the one hand there is the blessing for Ishmael in Genesis 17:20: “And as for Ishmael, I have heard you: I will surely bless him; I will make him fruitful and will greatly increase his numbers. He will be the father of twelve rulers, and I will make him into a great nation.” This is in line with God’s promise to Hagar that her son’s descendants will be too numerous to count (Genesis 16:10).

On the other hand, they have also looked to Genesis 16:12, in which an angel prophesies to Hagar, Ishmael’s mother, that her son will be “a wild man; his hand will be against every man, and every man’s hand against him”. Then later, Genesis 25:18 reports that the Ishmael’s descendants “lived in hostility towards all their brothers.” Preachers have also traced the spiritual roots of the conflict between Muslims and Jews back to the rejection of Hagar and her son by Abraham and Sarah. Some even trace the Israeli-Palestinian conflict back to the rivalry between Isaac and Ishmael and their competing blessings. Fact or fantasy?

How Did This All Begin?

According to Sir Fergus Millar, Professor Emeritus of Ancient History at Oxford University, it was Josephus, a Jewish historian writing in the first century CE, who first advanced the idea that Ishmael was the ancestor of the Arabs. In The Antiquities of the Jews Josephus stated that Ishmael was ‘the founder’ of the Arabian nation, and Abraham was ‘their father’. From Josephus, this assumed connection between the Arabs and Abraham, through Ishmael, passed into the historical consciousness of Christians, and then made its way into early Islam.

The Qur’an does not speak of Ishmael or Abraham as ancestors of the Arabs – although it does have Abraham and Ishmael praying for Allah to make their descendants a Muslim people – but a link is established in the hadith literature. Muhammad sometimes called Arabs ‘offspring of Ishmael’, and a hadith in the Sahih Bukhari reports that Ishmael lived with his mother at Mecca for a time, where he learnt Arabic from a pre-existing Arab tribe, the Jurhum.  This account implies that Arabs already existed before Ishmael. Later Islamic traditions traced the descent of some but not all Arabs, including Muhammad himself, back to Ishmael.  Thus Abraham and Ishmael came to be considered, in Islamic tradition, not only a spiritual antecedent of Muhammad as an Islamic prophet, but also the physical ancestor of some but not all Arabs.

What does the Bible say?

The Bible does link the Ishmaelites with the Midianites, using these names as synonyms in two places. Genesis describes Joseph as being sold to a caravan of camel-riding Ishmaelites who are also called Midianites (Genesis 37:25–28, 36; 39:1; see also Judges 8:22-24).

In Genesis, the identity of people groups is often traced back to an ancestor, and the group is then named after this ancestor. How do the Ishmaelites fit into this pattern? Genesis associates various descendants and relatives of Abraham with people groups. These include:

Lot’s sons (Lot was the son of Abraham’s cousin Haran):

Note that the identifiable languages associated with groups descended from Abraham and his nephew Lot are members of a closely related family known in Semitic linguistics as ‘Canaanite’* languages. These were very similar and could have been mutually comprehensible. The Moabite and Ammonite languages, associated with the descendants of Lot through his two sons, are in the same group as Edomite, associated with Esau, and Hebrew, associated with Jacob or Israel. This suggests that the Ishmaelites would have been speakers of a Canaanite dialect as well, like all the other branches of Abraham’s family.

Furthermore, there is evidence in Genesis 31:47 that Abraham spoke a Canaanite dialect,  in contrast to his kinsman Laban, who spoke Aramaic, because the heap of stones they erect is given a Hebrew name, Galeed, by Abraham, and an Aramaic name, Jegarsahadutha, by Laban.

Historical linguists have dated the separation of Arabic from Northwest Semitic around a thousand years earlier than the period when the Canaanite languages diverged from each other. This means at the time of Abraham, Arabic already existed as a separate linguistic group.  This is not consistent with Ishmael being the father of the Arabs, because it means that Arabic goes back to a much early branching of the Semitic family than the divisions between the members of Abraham’s family.

Even if one discounts the historicity of origin stories of these tribes, which the Bible uses to connect them to the family of Abraham, what is still clear is that the author(s) of the Torah had an understanding that certain tribes were related to each other, and this sense of relatedness needs to be taken into account. For example Deuteronomy 23:7 warns “Do not despise an Edomite, for the Edomites are related to you.” The same word ’aḥ ‘brother, kin, related, of the same tribe’ is used in connection with Ishmael’s descendants in Genesis 25:18, who were said to be in hostility to their kin. The implication is that the Ishmaelites were considered to be related to the tribes associated with them in Genesis, i.e. the Israelites, the Edomites, Moabites, Midianites and Ammonites.  The simplest and most obvious explanation is that these groups, together with the Ishmaelites, spoke manifestly similar dialects.  It seems significant that the Amorites, whose language sits closer  to Hebrew than Arabic in the Semitic family, was nevertheless not considered to be one of the Abrahamic peoples, but this group’s descent is traced through Ham (Genesis 10:16).  The origin stories of Genesis are evidence, admittedly circumstantial, that the Ishmaelites spoke a dialect recognisably similar to those spoken by the other tribes which Genesis links to Abraham’s family.

What happened to the Ishmaelites?

Over time, Arabic speakers displaced some of earlier Canaanite nations, including the Moabites and the Edomites, who had dwelled around Arabah rift valley and the Dead Sea. The Edomites were pushed to the north, into the southern edge of Judea, which became known known in Greek as Idumea. It seems that the Ishmaelites had been displaced centuries earlier.

There is a moral in this story for the unwary, who might seek to find keys to the present in Genesis. It is this: the dysfunctional travails of Abraham’s family are not the place to seek out the spiritual roots of present-day Middle East conflicts.

To answer the question “Is Ishmael (or Abraham) the father of the Arabs”, a Muslim might well turn to and be satisfied with Islamic authorities such as the hadith. But a Christian or a Jew might well ask whether they want Josephus to be their master and guide on this point.

The evidence indicates that Ishmael was not the father of the Arabs, and neither was Abraham. The Ishmaelites were probably Canaanites,* speaking, not an early form of Arabic, but a dialect similar to Hebrew. In time they disappeared or were absorbed into other groups, like so many other ancient peoples. Much later Josephus invoked Ishmael’s name to conjure up a genealogy for the Arabs. He has a lot to answer for. The rest, as they say, is history.

* The term Canaanite is used here in the linguistic sense, for a group of closely related languages, not in the sense of Genesis, where it refers to the pre-existing peoples of Canaan at the time of the Exodus.  In the sense used here, Hebrew was a Canaanite language. Only some of the peoples in Canaan spoke Canaanite languages in the sense used here. For example the Hittites were not linguistic Canaanites, because their language was unrelated (Hittite was related to Greek and Latin). However Genesis considers the Hittites to be Canaanites, in the Biblical sense of a people living in Canaan.

†Ephʿal points out that the names of the sons of Ishmael listed in Genesis 25 bear some similarities to names of certain tribes identified by as Arabs by Assyrian sources, but concludes that the introduction of the sons’ names into Genesis was a later insertion, ‘more in the nature of an ethnological “midrash” on  Ishmael.’ Ephʿal cites inconsistencies between the region and places associated with the sons of Ishmael in Genesis 25:13–16, and the region and places associated with the Ishmaelites elsewhere in the Bible.

Want to learn more?  Here are some sources used in this article.

Millar, Fergus, 2006. ‘Hagar, Ishmael, Josephus, and the origins of Islam’. In Fergus Millar, Hannah H. Cotton, and Guy MacLean Rogers, Rome, the Greek World and the East. Vol. 3. The Greek World, the Jews and the East, 351-377. Chapel Hill: University of North Carolina Press.