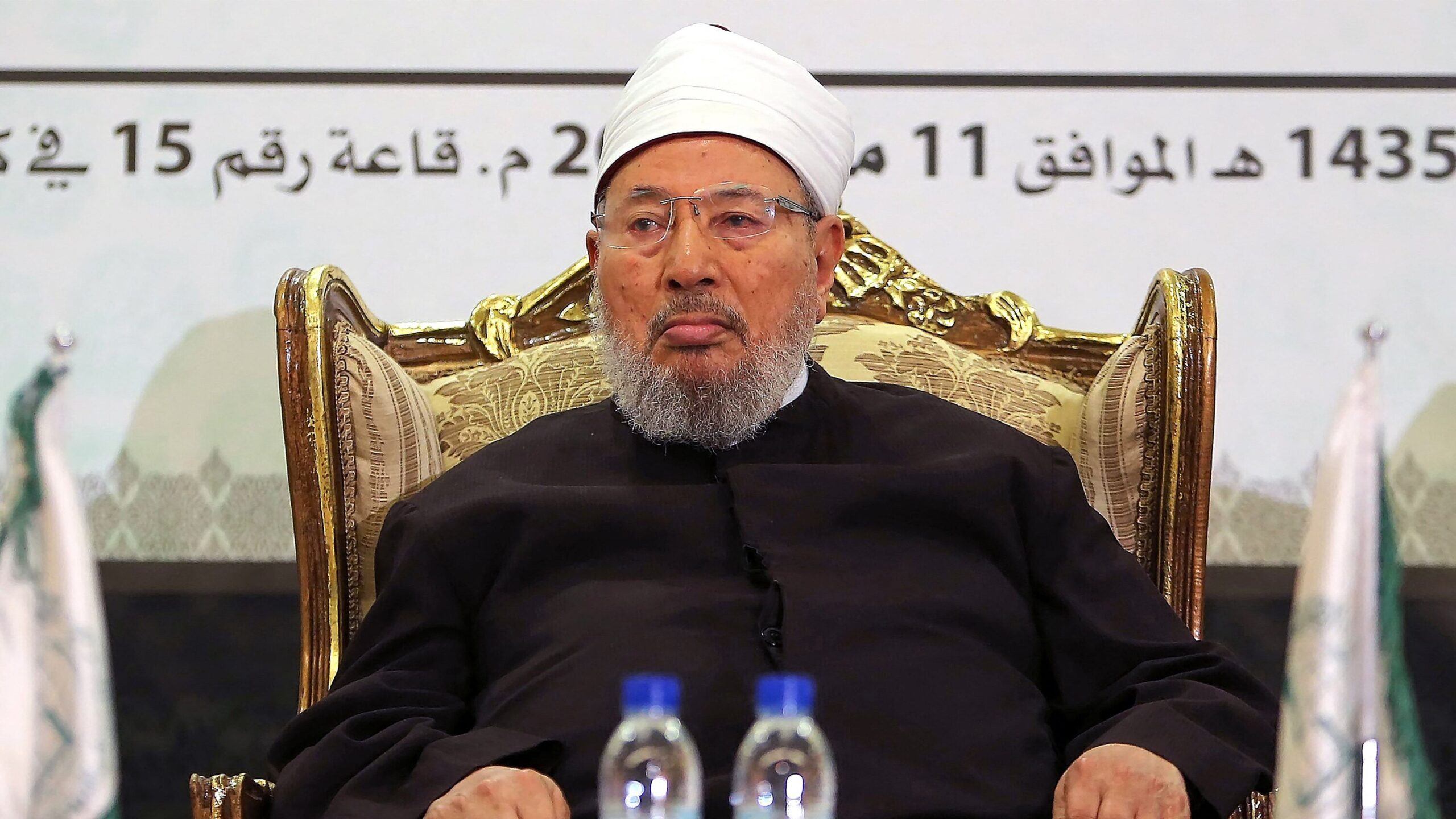 Posted at 11:24h in Understanding Islam by Mark Durie 0 Comments

Two important modern reference works on jihad in Islam are Muhammad Haykal’s Jihad and Fighting according the the Shar‘i Policy (Al-Jihad wa-l-qital fi al-siyasa al-sharia’iyya) and Yusuf Al-Qaradawi’s Jurisprudence of Jihad (Fiqh al-jihad).  Both these works give the lie to apologies offered by many western scholars for Islam’s militancy, such as the claim that jihad is purely defensive.

As yet, neither work is available in English translation.  Remarkably, Haykal attempts in his copyright statement to forbid anyone from quoting from or translating his work into any language other than its original Arabic.  (However David Cook’s Understanding Islam gives a useful overview of Haykal on pp.124-127).

The TranslatingJihad website has recently posted a translation from a key section in Al-Qaradawi’s Fiqh al-Jihad (see here), which discusses the issue of whether ‘moderate’ Muslims support aggressive jihad.  This was translated from a fatwa posted on IslamOnline.net. The fatwa is by Dr. ‘Imad Mustafa, professor at Al-Azhar University, who relies upon a passage from Al-Qaradawi’s Fiqh al-Jihad to support his ruling in support of aggressive jihad.

Al-Qaradawi is one of the most influential public intellectuals in the world today.  He is a trustee of Oxford University’s Centre for Islamic Studies, and his program on Al Jazeera reaches an estimate audience of 40 million world wide.

In the passage cited by Dr Mustafu, Al-Qaradawi defends ‘moderate’ Muslims from the charge, made by ‘extremists’, that they do not support ‘offensive jihad’, which is aggressive warfare to conquer non-Muslim territory for Islam.

That Al-Qaradawi feels the need to mount such a defense at all is in itself a matter of considerable interest.

Jihad is a highly prestigious concept in Islam.  The traditional view has always been that Islam’s conquest of non-Muslim civilizations was one of its greatest achievements, and certainly not something to be embarrassed about or to resile from.  To accuse a group of Muslims of rejecting aggressive jihad is a tactic which will discredit them in the eyes of many other Muslims.  Thus it is not surprising that Al-Qaradawi feels the need to defend ‘moderates’ – such as himself – from this charge.  He writes:

Some of the offensive (jihadists) have not been fair to those who hold the opposing view. They have put words in their mouths which they did not say, and accused them of that which they are innocent. They say: “They (the defensive jihadists) do not accept offensive jihad under any circumstance, in any form, or for any reason. They do not believe jihad is legitimate except in one condition, which is if Muslims are attacked in their homes and lands.” This is how they depict the opinion of the moderates or the defensive (jihadists).

I think they are not being fair with the opposing side, and are not being precise or honest in presenting their views. Whoever reads their [i.e. the moderates’] opinions, will find that they accept offensive jihad, and attacking the infidels in their lands, for several reasons…

There is a great irony here.  On the one hand, many Western scholars defend ‘moderate’ Islam on the basis that the concept of jihad is merely defensive, or not even militaristic at all.  On the other hand, as prominent and influential a scholar as Al-Qaradawi feels the need to defend ‘moderate’ Islam on the grounds that it endorses aggressive jihad.

Al-Qaradaqi lists four conditions under which aggressive jihad would be supported by ‘moderate’ Muslims:

There is ample provision in these principles to support just about any jihad conquest of non-Muslim lands.  Just as Hitler termed the conquest of Poland an act of ‘liberation’, since time immemorial ambitious rulers have used the language of benevolence and liberation to justify their acts of aggressive conquest.

Al-Qarawi’s point number 1 alone is wide enough to drive a truck through.  In his explanation of point 1, Al-Qaradawi states:

[Aggressive jihad is called for:] To ensure the freedom to propagate the call to Islam, to prevent fitna in the religion (of Islam), and to remove the physical obstacles which prevent the call to Islam from reaching the multitudes of people.

This was the reason for the conquests of the rightly-guided (caliphs) and the companions (of the Prophet), as well as those who followed them in righteousness. (They fought) to remove the power of the tyrants who controlled the necks and minds of men, and who said what Pharaoh said to those of his people who believed (in Islam): “Have you believed before I gave you permission to believe?” This is the embodiment of the goal expressed in the saying of the Almighty: “Fight them on until there is no more fitna.”

Al-Qaradawi’s citation of the Quranic verse ‘fight them until there is no more fitna’ deserves explanation.  The key point is the meaning of fitna.  I reproduce here my comments on this concept in The Third Choice (pp.96-98):

The Arabic word fitna ‘trial, persecution, temptation’ is of crucial importance in understanding Muhammad’s metamorphosis, which was one of the spiritual fruits of the formative Meccan period. The word is derived from fatana ‘to turn away from, to tempt, seduce or subject to trials’. The base meaning is to prove a metal by fire. Fitna can include either temptation or trial, including both positive and negative inducements, up to and including torture. It could encompass seducing someone, or tearing them limb from limb.
Fitna became a key concept in theological reflection upon the early Muslim community’s experiences with unbelievers. The charge of Muhammad against the Quraysh was that they had subjected him and the rest of the Muslims to fitna – including insult, slander, torture, exclusion, economic pressures, and other temptations – in order to get them to leave Islam or to dilute its claims. Ibn Kathir reports that after the migration to Medina, the first verses revealed concerning fighting made clear that the whole purpose of fighting and killing was to eliminate fitna, because it could cause Muslims to turn away from their faith:

And fight in the way of Allah with those who fight with you,
but aggress not: Allah loves not the aggressors.
And slay them wherever you come upon them,
and expel them from where they expelled you;
persecution (fitna) is more grievous than slaying
.…
Fight them, til there is no persecution (fitna);
and the religion is Allah’s;
then if they give over [i.e. cease their disbelief and opposition to Islam],
there shall be no enmity save for evildoers.’ (Q2:190-93)

The idea that fitna of Muslims was ‘more grievous than slaying’ proved to be a significant one. The same phrase would be revealed again after an attack on a Meccan caravan (Q2:217) during the sacred month (a period during which Arab tribal traditions prohibited raiding). It implied, at the very least, that shedding the blood of infidels is a lesser thing than a Muslim being led astray from their faith.
The other significant phrase in this passage from Q2 is ‘fight them until there is no fitna’. This too was revealed more than once, the second time being after the battle of Badr, during the second year in Medina (Q8:39).
These fitna phrases, each revealed twice in the Quran, established the principle that jihad was justified by the existence of an obstacle to people entering Islam, or of inducements to Muslims to abandon their faith. However grievous it might be to fight others and shed their blood, undermining or obstructing Islam was worse.
Some Islamic jurists maintained a more limited and narrower interpretation, namely that ‘fitna is worse than slaughter’ simply meant fighting should continue ‘until no Muslim is persecuted so that he abandons his religion’. However most extended the concept of fitna to include even the mere existence of unbelief, so the phrase could be interpreted as ‘unbelief is worse than killing’. Thus Ibn Kathir equated fitna with what he called ‘committing disbelief ’ and ‘associating’ (i.e. polytheism), alongside hindering people from following Islam:

Since jihad involves killing and shedding of blood of men, Allah indicated that these men [i.e. polytheists] are committing disbelief in Allah, associating with Him (in the worship) and hindering from His path, and this is a much greater evil and more disastrous than killing. (Tafsir Ibn Kathir)

Understood this way, the phrase ‘fitna is worse than killing’ became a universal mandate to fight and kill all infidels who rejected Muhammad’s message, whether they were interfering with Muslims or not. Merely for unbelievers to ‘commit disbelief ’ – to use Ibn Kathir’s phrase – was a greater evil than their being killed.
On this understanding the concept of jihad warfare to extend the dominance of Islam was based. Thus Ibn Kathir, when commenting on Q2 and Q8, said that the command to fight means to go to war ‘so that there is no more Kufr (disbelief)’ and the Quranic statements ‘and the religion is Allah’s’ (Q2:193) or ‘the religion is Allah’s entirely’ (Q8:39) mean ‘So that the religion of Allah [i.e. Islam] becomes dominant above all other religions.’
The renowned modern jurist Muhammad Taqi Usmani (b. 1943) reports that religious authorities have universally accepted that jihad is warfare to make Islam dominant:

… the purpose of Jehad … aims at breaking the grandeur of unbelievers and establish that of Muslims. As a result no one will dare to show any evil designs against Muslim on one side and on the other side, people subdued from the grandeur of Islam will have an open mind to think over the blessings of Islam. … I think that all Ulema (religious scholars) have established the same concept about the purpose of Jehad. (Islam and Modernism, pp. 133-134)