What is Islam’s Relationship to Christianity? The Theological Analysis of the Bible and the Quran 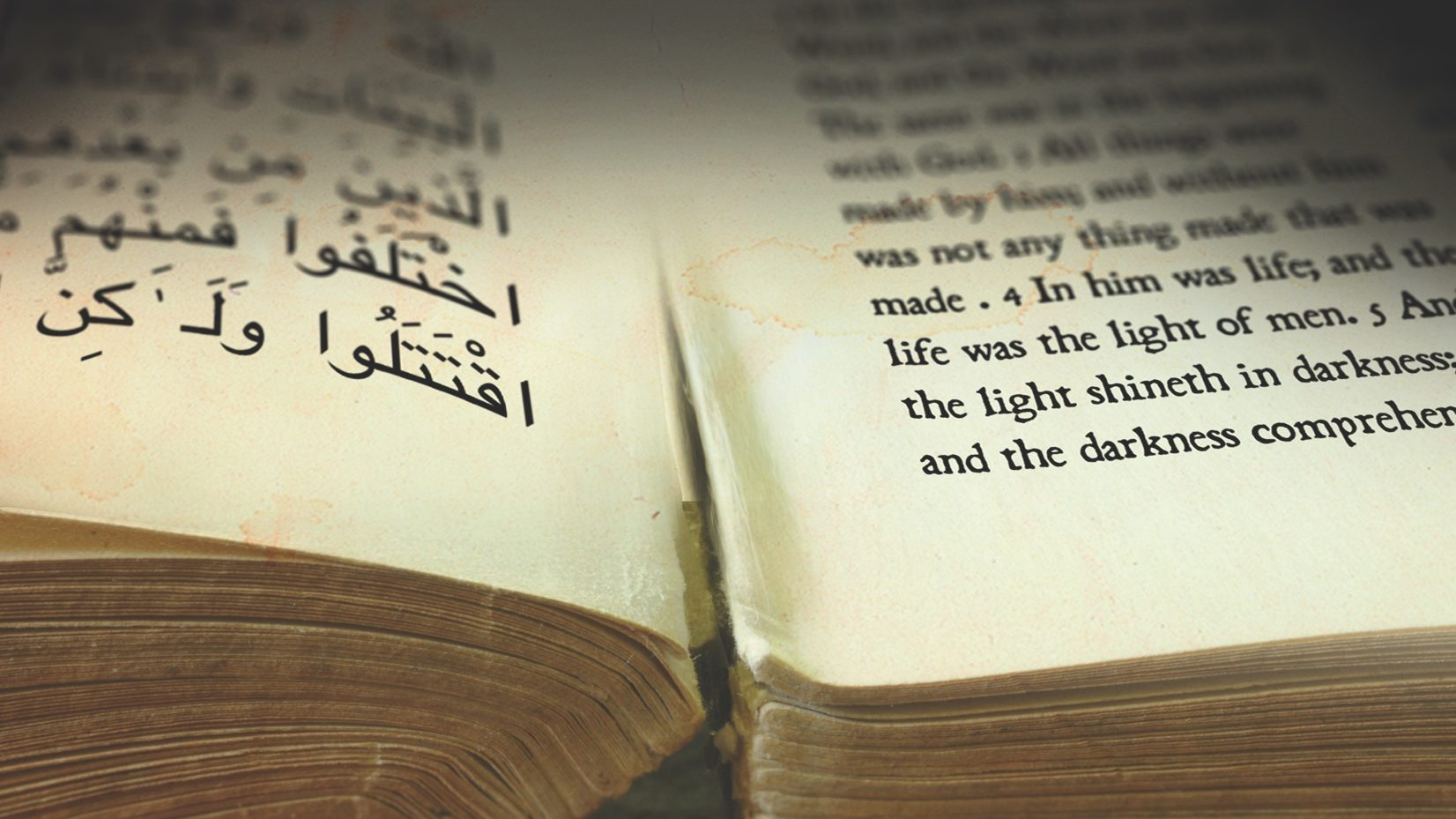 16 Nov, 2021 What is Islam’s Relationship to Christianity? The Theological Analysis of the Bible and the Quran

The Quran is a book of the utmost importance and influence in the world today. It is the foundational text of Islam, and through the Islamic sharia it shapes legal systems, politics, ethics, cultures, and worship for a quarter of the world’s population.

There are many things about the Quran that are hard to understand and can seem puzzling. It is not an easy read. However, for Christians perhaps the most intriguing thing about the Quran is its many allusions to biblical stories and characters. Although Islam has offered a most effective challenge to Christianity during the past 1,400 years, conquering and then Islamizing four of the five patriarchates in the Pentarchy of late antiquity—Alexandria, Jerusalem, Antioch, and Constantinople—the text of the Quran draws heavily upon the Bible. The two most frequently named figures in the Quran are Moses (136 times) and Abraham (69 times). Jesus is mentioned by name six times as frequently as Muhammad.

One of the striking things about the Bible-in-the-Quran is the puzzling combination of knowledge and the lack of it. For example, although it contains hundreds of references to biblical figures and events, the Quran seems to consider Mary the mother of Jesus (Miriam in Hebrew) to be the same person as Miriam the sister of Moses and Aaron. In a surah (chapter) of the Quran called ‘The Family of Imran’ (Biblical Amram of Exod 6:20) there is an account of the birth of Mary to the ‘wife of Amram’, after which she is brought up by Zakariah, the father of John the Baptist (Surah 3:35–37). Then again, in Surah 19:28, Mary is called the ‘sister of Aaron’.[1] These observations give rise to the question: ‘How can the Quran know so much about the Bible, while at the same time, not know that a thousand years separated the family of Amram from the family of Jesus of Nazareth?’

This is by no means the only inconsistency between the Bible and the Quran. Some others are the appearance of a Haman, a name familiar from the book of Esther, in the court of Pharoah at the time of Moses (Surah 28:6); the participation of a ‘Samaritan’ in the golden calf episode from Exodus 32 (Surah 20:85, 87, 95); and a reference to Saul choosing his warriors based on whether they scooped water with their hands or drank by lapping with their mouths (Sura 2:249), which surely goes back to the story of Gideon in Judges 7.

I do not mention these mismatches between the Quran and the Bible for apologetic or polemical purposes, but simply to underscore this important question: ‘What is so much of the Bible doing in the Quran?’ Down the centuries, a repeated Christian response to the rich and peculiar vein of biblical materials which runs through the Quran has been to conclude that Islam arose from what was originally some kind of sectarian Christianity. Thus John of Damascus, writing a century after Muhammad, claimed that Muhammad, ‘after conversing with an Arian monk concerning the Old and New Testament, fabricated his own heresy.’[2] Other luminaries who have held a similar view have included Thomas Aquinas, Nicholas of Cusa, and Martin Luther, some claiming Arian influence, others Nestorian. Until modern times this perspective has been so prevalent that it could be considered the conventional Christian explanation for the biblical materials found in the Quran.

This framing of Islam as a Christian heresy has stimulated two opposite impulses. One is to correct what are taken to be ‘errors’. This was the approach of John of Damascus. A contrasting response has been what Bishop Kenneth Cragg has called a process of retrieval.[3] Cragg’s idea of retrieval was that Christians ought to undo or reverse the divergence from the gospel, by removing the veil which obscures the true Christ within Islam. This approach seeks to affirm what is true in the Quran by unveiling it. Some authors—and Cragg is an example—have argued that the veil is only in place because of Christian failure, because ‘Islam developed in an environment of imperfect Christianity.’[4] Thus, for Cragg, the retrieval is also a ‘restitution.’[5] The Qur’an and its Biblical Reflexes by Mark Durie

But what if both ‘correction’ and ‘retrieval’ are misguided? What if the whole idea of Islam arising from Christian roots is a derogatory error? Is it possible that neither the correction approach nor the retrieval approach is valid?

In my book, The Qur’an and Its Biblical Reflexes,[6] I explored an alternative thesis, that there is a deep theological disconnect between the Bible and the Quran, too deep to sustain the view that Islam arose out of Christianity or Judaism in any meaningful sense. Yes, the Quran incorporates biblical (and extra-biblical) Christian and Jewish materials, but it repurposes them to serve a radically different theological agenda: the Quran marches to the beat of its own theological drum. I concluded that the sheer volume of biblical reflexes in the Quran is not actually evidence of a deeper ‘family-tree’ affinity between Islam and Christianity.

In one example, the Quran refers repeatedly to Jesus (Isa), and even calls him the Messiah (al-Masih), but this is a Christ without a Christology, for there is no explanation of what a Messiah might be. The sound shape of the messianic title has been carried over into the Quran, but nothing of its meaning.

The theological difference between the Bible and the Quran runs deeper than superficial similarities might first suggest. For example, the Quran lacks a covenantal theology to frame a saving relationship between human beings and Allah. A careful linguistic analysis of the quranic Arabic words mithaq and ahd, sometimes translated as ‘covenant,’ reveals that in the Quran God does not enter into reciprocal binding obligations with people; such relationships only exist between human beings. Putative quranic ‘covenants’ between God and people in the Quran are actually obligations imposed by God upon his human slaves.

The sheer volume of biblical reflexes in the Quran is not actually evidence of a deeper ‘family-tree’ affinity between Islam and Christianity.

To be sure, the Quran borrows materials prodigiously from Christian and Jewish sources, but not for forming its theology. For example, the idea of warring in the name of God was current among Christians at the time of the Quran, which picked up and incorporated ideas and practices from contemporary Christianity,[7] but the Quran does this without drawing upon biblical theologies of warfare. Instead, it creatively develops its own war theology, fitting what is taken from contemporary Christian practices into a framework of pre-Islamic Arab raiding culture.[8]

At first sight monotheism is a theological idea the Bible and the Quran have in common, but first appearances can be deceptive. In the Torah the call to monotheism is about exclusive covenantal loyalty to Yahweh: ‘You shall have no other gods before me’ (Deut 5:7). However, the Quran’s idea of God’s oneness is grounded in Arabic ideas of client-protégé relationships and, negatively, in the assertion that no idea of propriety partnership (shirk) can be applied to God. These metaphors owe little if anything to the Bible, but are grounded in the values of Arab culture, for example the insight that it is disastrous for a slave to be owned by two masters (Sura 39:29).

The list of key biblical theological concepts, which were not taken up into quranic theology, includes the idea of the presence of God, the concept of holiness, and the idea that sin is a breach of relationship that can be repaired through atonement.

If not a family tree, then what?

Many Christians assume that Islam developed out of Judaism and Christianity. This is itself a manifestation of the conventional ‘Christian heresy’ view of Islam. Behind this, a ‘family tree’ model is assumed, in which the root is Judaism. This branches out into Christianity, and then later Islam branches off. My research suggests that this way of thinking is a false lead, which pays too much attention to superficial similarities and not enough to theology.

I wrote in The Qur’an and its Biblical Reflexes that ‘a challenge of modeling the relationship of Islam to Judaism and Christianity is to be able to refer to a conceptual framework for the genesis of a faith that can accommodate a pattern of extensive influences combined with evidences of significant disconnections, which is what we know to be the case with the Quran.’[9] If Islam and Christianity are not in some kind of kinship relationship, how then are we to conceptualize a connection which resulted in a very large volume of biblical content being absorbed into the Quran? If not a family tree, then what?

In The Qur’an and its Biblical Reflexes I drew on two metaphors. One is a building metaphor. Islam’s relationship to Christianity is not like that of a church which has been transformed into mosque, like the Hagia Sophia in Istanbul. Rather it is more like a church has been demolished, and its materials have been repurposed for the construction of a mosque, rather like the pillars in the mosque at Qairawan in Tunisia, which were repurposed from earlier churches, long since demolished.[10]

I proposed that the Quran was produced by a process of hybridization, in which Christian and Jewish influences provided the superstrate.

The other metaphor I drew on was linguistic hybridization. Some languages are formed by combining materials from a superstrate language and a substrate language (or languages). An example is Haitian Creole, for which the superstrate was French, and the substrate West African languages. The result is that Haitian Creole’s words are largely French, but its grammar, morphology, and phonology—its heart—is pure West African.

I proposed that the Quran was produced by a process of hybridization, in which Christian and Jewish influences provided the superstrate, while pre-Islamic Arab language and culture provided the substrate, including much of the theology.

The observation that the Quran does not have a ‘family tree’ relationship with Judaism and Christianity should not in any way be considered pejorative. If the Quran ‘is neither a text subsidiary to the Bible, nor is it to be attached to a genetic family tree alongside it,’[11] then Christians can be liberated from thinking of Islam as some kind of Christian heresy, and begin to understand it for what it actually is, and not what at first sight it might appear to be to Christians.

The perspective offered here, if valid, could have profound implications for coexistence between the two faiths, including for interfaith dialogue. It also has implications for mission. It means that both missionaries and dialogue partners can set aside the tasks of ‘correction’ or ‘retrieval’, for these two opposite approaches are really but two sides of the ‘heresy’ coin.

My findings offer an invitation to Christians to ponder the similarities and (deep) differences between Islam and the two biblical faiths, Judaism and Christianity, with fresh eyes.

This article originally appeared in the November 2021 issue of the Lausanne Global Analysis and is published here with permission. To receive this free bimonthly publication from the Lausanne Movement, subscribe online at https://lausanne.org/lga.