Islam’s Tradition of Breaking the Cross 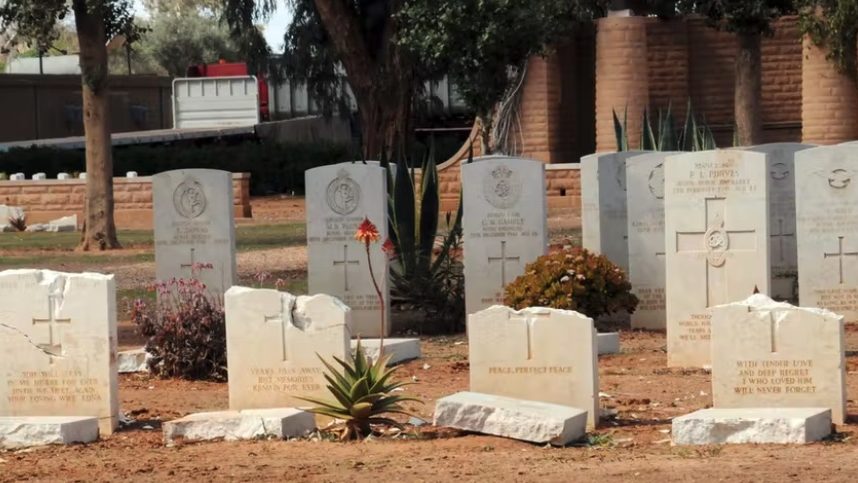 Posted at 11:13h in Understanding Islam by Mark Durie 0 Comments

This was no “furious mob” on a “rampage,” reacting to Koran-burning. These men are methodically, deliberately, and in an organized fashion going about destroying crosses and objects marked with crosses. Their mood seems happy.

In the recent destruction of Commonwealth war graves in Benghazi, Libya (YouTube Video), you can see not just the desecration of graves, but attacks on crosses.

The radical Muslims who are kicking over and smashing headstones marked with crosses (and one with a Star of David), also took pains to demolish a tall “Cross of Sacrifice” standing at the edge of the cemetery.

This was no “furious mob” on a “rampage,” as a Daily Mail report put it. Nor was there any evidence in what they were saying that they were angry or reacting to Koran burning by the US military.
The men are methodically, deliberately, and in an organized fashion, going about destroying crosses and objects marked with crosses. Their mood seems happy. Every now and again the cry Allahu Akbar rings out, or a chuckle of joy. They pass comments on the graves as they kick them over: “Break the cross that belongs to those dogs,” “This is the grave of a Christian,” and, “This tomb has a cross on it: a kaffir [disbeliever].”

An Australian government minister, Craig Emerson, whose father served in Libya in World War II, commented, “There is nothing in Islam that would warrant this sort of behavior.”  But is this true? Or just wishful thinking? Certainly many Libyans and Muslims of other nationalities have expressed their abhorrence of these acts. It would be completely wrong to attribute sympathy for such an attack to Muslims as whole. But all the same, was this attack on war graves truly senseless and without foundation or precedent in Islam? Regrettably, the answer is “No.”  The phenomenon of cross-destruction goes back to the life and example of Muhammad. A tradition reported by al-Waqidi said that if ever Muhammad found an object in his house with the mark of a cross on it, he would destroy it. (W. Muir, The life of Muhammad. Volume 3, p.61, note 47.)

In the YouTube video, when one of the men says, “Break the cross that belongs to those dogs,” he uses the same classical Arabic phrase, “break the cross” (the Arabic root is k.s.r ‘break’), which is found in a famous hadith (tradition) about Jesus — understood in Islam to be a Muslim prophet — who will return to the earth as a cross-destroying enforcer of Islamic Sharia law:

Narrated Abu Huraira: “Allah’s Apostle said, ‘By Him in Whose Hands my soul is, surely [Jesus,] the son of Mary will soon descend amongst you and will judge mankind justly [as a Just Ruler]; he will break the cross and kill the pigs and there will be no jizya [i.e. no taxation taken from non Muslims: because they will all be forced to convert to Islam]. …'”
(Sahih al-Bukhari: The Book of the Stories of the Prophets. 4:60:3448.)

This phrase ‘break the cross’ is religious and ritualistic in its overtones, invoking the canon of Islam. It is like a Christian saying ‘forgive us our trespasses’ in reference to the Lord’s Prayer. This is a clear reference to the words of Muhammad, and invokes his authority for the deed being performed.

To pious Muslims, Muhammad is regarded as the “best example” for Muslims to follow, so it is hardly surprising if his enmity to the cross is shared by at least some Muslims today. The following are just some of many examples of cross destruction which can be culled from media reports of recent years:

Antipathy to the cross among Muslims is not limited to Islamic societies: In November 2004, Belmarsh Prison in England was reported to have plans to spend £1.6 million on a mosque. The facility already maintains a multi-denominational chapel, but this has been rejected for use by the Muslim inmates, some of whom had been convicted on terrorism charges, because the chapel contains crosses which have to be covered up when the Muslims say their prayers.

No less a figure than the former Archbishop of Canterbury, George Carey, was compelled to remove his pectoral cross when he had to make a forced stop in Saudi Arabia in 1995. The incident is described by David Skidmore in the Episcopal News Service:

Carey’s flight out of Cairo for Sudan was forced to make an intermediary stop in Saudi Arabia. On the approach to the Red Sea coastal city of Jidda, Saudi Arabia, Carey was told to remove all religious insignia, including his clerical collar and pectoral cross.

There is another pattern at work here, which is the destruction of non-Muslim (infidel) graves and religious heritage. The Taliban’s destruction of Buddhist sites in Afghanistan is a well-known example, as was the deliberate destruction of around 38,000 Jewish graves on the Mount of Olives, some of which were over 1,000 years old, during Jordan’s occupation of Jerusalem from 1948 to 1967.

It must also be acknowledged that radical Sunni Muslims have a long history of destroying Muslim graves as well, if they have become sites of pilgrimage or veneration. The Wahhabis of Saudi Arabia have been known for more than one hundred years for destroying venerated gravesites, including those of some of Muhammad’s own relatives (see a Shi’ite lament here). In Libya, Salafists have also been busy destroying graves of Sufi saints. Likewise, in Somalia the al-Shabab movement has been destroying Sufi graves (as well as war graves of Christians: see here). In the light of other parallels, the destruction of this cemetery cannot be regarded as simply a senseless act done by a “rampaging mob.” It was a thoughtful, deliberate act, which conforms to a widely attested pattern, namely the destruction of crosses, support for which can be found in canonical Islamic sources and the teaching of Muhammad. It also conforms to a pattern of destruction of gravesites, of both non-Muslims and Muslims, by radical Muslims — not with Koran-burning by the US military.