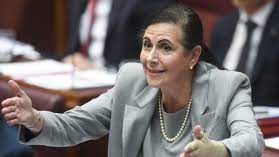 This article was first published on Quadrant Online.

Other than the need to discredit her party’s former leader and push what might be termed the Turnbull Doctrine of warm-and-cuddly relativism, what could have possessed Australia’s Assistant Minister for Multicultural Affairs to present Islamic dogma as incontrovertible fact?

Writing in The Australian, Concetta Fierravanti-Wells has attempted to throw light on the challenge of Islamic radicalism. She offers a ‘reality check’ by injecting what she asserts are ‘basic facts’ into the public debate. However she only succeeds in promoting misinformation and multiplying confusion.

Why must the Australian assistant minister for multicultural affairs present Islamic dogma as incontrovertible fact? Fierravanti-Wells astonishingly declares the Koran to be ‘a collection of revelations from God to the Prophet Mohammed.’  Does she really accept it as a ‘basic fact’ – for the purpose of public debate – that Mohammed was God’s prophet, or that the Koran is a genuine revelation from God? Surely only a believing Muslim could make such a declaration and mean it?

Why can Fierravanti-Wells not show more sensitivity to disbelievers in Islam – the majority of her audience – by adopting an objective stance, for example by saying ‘Muslims believe the Koran to be a collection of revelations from God,’ or ‘Muslims believe Mohammed to be a prophet’?

Fierravanti-Wells also misrepresents other faiths.  It is not true that all ‘world faiths’ apart from Islam have intermediaries between God and the individual.  The majority of Protestants around the world do not recognise a hierarchy of clergy, and a great many Christians do not accept that there are intermediaries between themselves and God.  To project supposed attributes of Catholic Christianity onto all Christians as part of an apology for Islam is not ‘basic fact’, but propaganda pure and simple.

Why does Fierravanti-Wells not understand that many Christians will see her list of ‘basic facts’ as a crude distortion of what they believe?  Does she really mean to imply that the Christians of the world have a single overarching authority to ‘establish or forbid’ religious practices or interpretation of the Bible?  They do not.  In this respect Muslims are no different from Christians. Of course some Christians do recognise an authority for their own denomination, but so do some Muslims sects.

Equally misleading is the claim that there is no overarching authority in Islam.  Many Islamic countries, such as Egypt, have a public official known as the mufti.  The mufti’s function is to pass authoritative rulings at a national level on religious matters. Moreover the Organisation of Islamic Cooperation – the UN of Islamic states – has established a peak religious body, the International Islamic Fiqh Academy, which is tasked with issuing authoritative rulings on religious matters. This academy draws upon the leading authorities on Islam from the nations of the world and is backed by the considerable political clout of the OIC.  It has been influential in several important areas, such as the international system of Islamic finance. Of course its rulings are not accepted by, or binding on, all Muslims, but there is no global Christian body which has that kind of authority either, and certainly no Christian organization has a claim to global legitimacy comparable to that of the International Islamic Fiqh Academy.

All these errors aside, the bottom line is that it is up to the Muslims of Australia who they choose to listen to and appoint as their religious leaders.  If what Fierravanti-Wells implies is true, namely that the vast majority of Australian Muslims want a ‘moderate’ form of Islam preached in their mosques, then let them take steps to ensure this happens. If they are unhappy with their imams, let them replace them, or else vacate those mosques to frequent other mosques they like better, with imams whose teachings they find more congenial.  This is how religious freedom works. It is precisely because Australian Muslims do have religious freedom that it is entirely reasonable for Australians to hold the Muslim community to account for the utterances of their leaders.