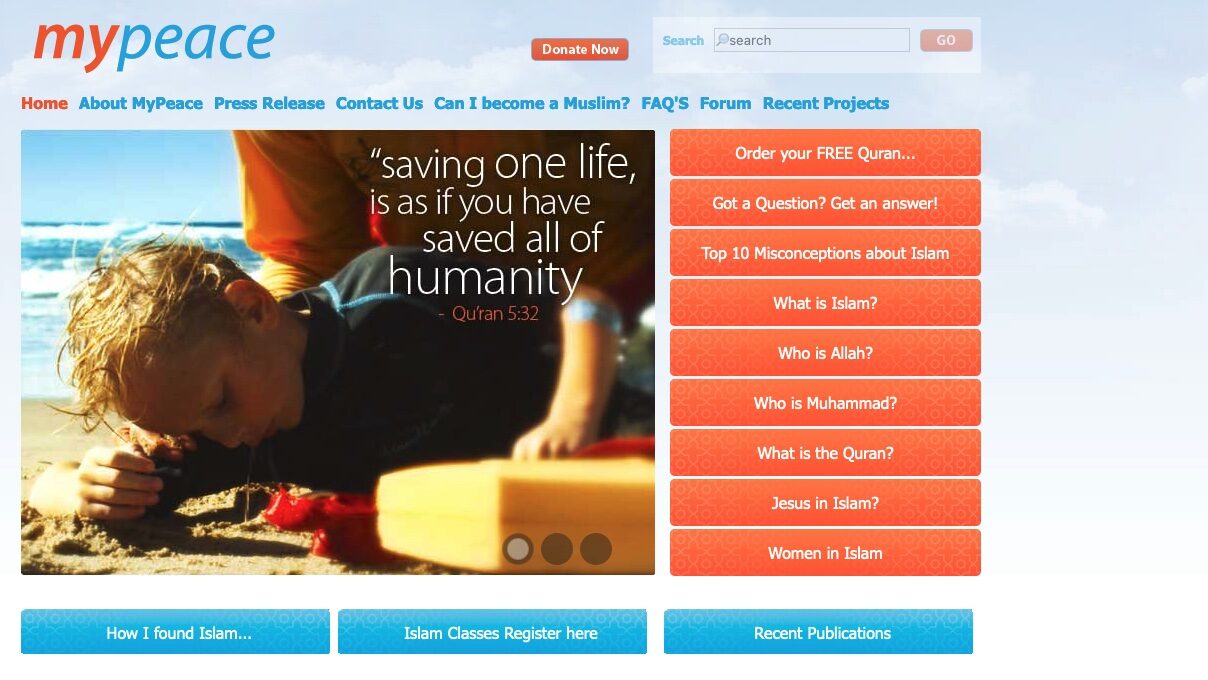 mypeace.com.au is an Australian dawah (i.e. missionary) website.  It is designed to invite people to convert to Islam.  Disingenuously it states that it exists to “address the many misconceptions about Islam”.

MyPeace is unashamed in declaring the superiority of its beliefs.  For example mypeace.com.au characterizes Christian beliefs as ‘blasphemous’, ‘distorted’ and ‘extreme’.  It also speaks of the Islamic Christ, who when he returns will, by military force destroy all other religions, and usher in a utopia of Muhammadan sharia law across the earth.  Furthermore, ‘only Muslims today actually follow Jesus and his true teachings. Their way of life is much more in tune with the way of life Jesus practiced than any of the modern day “Christians.”‘  In order words, Islam is the true Christianity.

This is an example of how MyPeace ‘addresses misconceptions’ about Islam.

MyPeace grabbed national attention with a series of billboards in Sydney earlier this year.

This week it is about to launch a TV ad campaign.  The ad can be viewed here.

The text of the ad is:

“Explore the real values of Islam at mypeace.com.au”

The text is read by a man with a broad Australian accent over scenes of:

Islam is based upon the Quran and the teachings and actions of Muhammad.  The ad neatly reflects this.  Australians should be more aware of both the Quran and Muhammad’s life and witness.

In the interests of ‘addressing misconceptions’ about Islam, I offer the full text of Sura 5:32-34, which is the first passage from which the TV advertisement quotes:

For this reason [i.e. Cain killing Abel] did We prescribe to the children of Israel that whoever slays a soul, unless it be for manslaughter or for mischief in the land, it is as though he slew all men; and whoever keeps it alive, it is as though he kept alive all men; and certainly Our apostles came to them with clear arguments, but even after that many of them certainly act extravagantly in the land.

The punishment of those who wage war against Allah and His apostle and strive to make mischief in the land is only this, that they should be murdered or crucified or their hands and their feet should be cut off on opposite sides or they should be imprisoned; this shall be as a disgrace for them in this world, and in the hereafter they shall have a grievous chastisement.

Except those who repent before you have them in your power; so know that Allah is Forgiving, Merciful. (Sura 5:32-34)

This cheery text includes a quote, somewhat altered, but still unmistakeable (in bold above) from the Talmud:

There is multiple irony in MyPeace’s advertisement.  First the ‘life-saver’ verse  is in fact a Jewish text.  Second this verse is followed by and conjoined to a verse which calls for apprehending, killing, crucifying, and chopping off fingers and limbs of those who oppose Allah and Muhammad ‘in the land’.

In reality verse 32 aims its message against Jews (and perhaps also Christians), of whom it is said that Allah’s ‘apostles came to them with clear arguments’.  What  should happen to such as these who ‘make mischief in the land’? (v.32).  The answer is found in the next verse: those who behave badly ‘in the land’  should be killed, mutilated or crucified.  Well, except for those who convert to Islam (i.e. those who ‘repent’ see Ibn Kathir on verse 34):  it is acceptable to let those who convert keep their fingers, arms, legs, lives and liberty.

Ibn Kathir goes on to report the view that this verse is in fact a warning against taking the life of a Muslim (but not of non-Muslims, because their lives are not protected in Islam like the lives of Muslims):

This is not a Nice Verse.

MyPeace is to be commended for bringing such an interesting and important passage to the attention of the Australian public.  But they did not go far enough: let them present the whole passage to ordinary Australians, together with the interpretations of great Muslim scholars  (such as Ibn Kathir) so that popular misconceptions about Islam can be eradicated in Australia.

Or else, if MyPeace’s goal is just to give a positive spin to Islam, they might like to reconsider leading with another verse, and stay clear of Sura 5:32.