This was published in the Australian Inquirer. It is a more general version of a longer article posted previously on Lapido Media.

As the expressions of shock and solidarity subside after the Paris killings, the challenge to understand will remain. Much commentary of the past week has situated these atrocities in opposition to values familiar to western people. Seen in this light the attacks appear senseless and even insane. US Secretary of State John Kerry called the killers ‘psychopathic monsters’. However the first step in understanding a cultural system alien to one’s own is to describe it in its own terms.

We can and must love our neighbour, as Walid Aly urged this week on The Project, but this need not prevent us from understanding our enemy, and to do this we need to grasp that this latest slaughter was shaped by religious beliefs.

In July a ISIS militant vowed on video to ‘fill the streets of Paris with dead bodies’, boasting that ISIS ‘loves death like you love life’.  Yet for ISIS these attacks were not pointless nihilism. Nihilism is a belief that there are no values, nothing to be loyal to, and no purpose in living, but these killings were purposeful. They were designed to make infidels afraid, to weaken their will to resist, and to render them self-destructive through fear. This strategy is made explicit in an ISIS celebratory post put out after the carnage, which quoted the Koran: ‘Allah came upon them from where they had not expected, and He cast terror into their hearts so they destroyed their houses by their own hands and the hands of the believers’ (Sura 59:2).

The taunt that ISIS jihadis ‘love death like you love life’ is not simply a life-denying death wish. This references multiple passages in the Koran in which Jews (Sura 2:94-96, 62:6-8) and non-Muslims in general (Sura 3:14; 14:3; 75:20; 76:27) are condemned for desiring life.  On this basis, ISIS considers Europeans to be morally corrupt, weak infidels who love this life too much to fight a battle to the death with stern Muslim soldiers whose hearts are set on paradise.

The ISIS post also referred to the French victims as ‘pagans’, by which it made clear that the victims were killed for being non-Muslims. Many commentators have rightly lamented ‘civilian casualties’, but the point is that ISIS rejects the Geneva Convention and has no use for the modern western concept of a ‘civilian’.  ISIS fighters are taught that non-Muslims, referred to as mushrikin ‘pagans’ or kuffar ‘infidels’, deserve death simply by virtue of their disbelief in Islam.  For ISIS, killing disbelievers is a moral act, in accordance with Sura 9:5 of the Qur’an, ‘fight and kill the mushrikin wherever you find them’ and Sura 9:29, ‘fight (i.e. to kill) the People of the Book’.

Some, like Australia’s Grand Mufti, have spoken in this past week of Muslim grievances.  However ISIS needed no appeal to grievances to justify its genocidal killing and enslaving of the Yazidis, whom it targeted solely because they were ‘pagans’.  It has the same fundamental objection to the people of France.

ISIS objects to Europeans because they are not Muslims, and to European states because they do not implement sharia law. Its goal is to dominate Europeans as dhimmis under a caliphate. It claims to follow Muhammad’s instructions to offer three choices to infidels: conversion, surrender, or the sword, or, as Bin Ladin put it, ‘The matter is summed up for every person alive: Either submit [i.e. convert], or live under the suzerainty of Islam, or die.’ 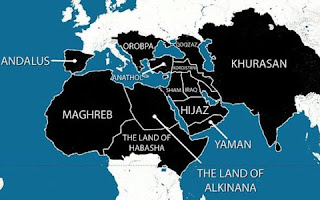 It may seem fanciful for ISIS to set its sights on the surrender or conversion of Europe, but, mindful of the history of Islamic imperialism, it thinks in time frames which extend to centuries. It believes Europe stands on the wrong side of history, and a final act of conquest can be preceded by decades, or even centuries, of military raids.

To combat this ideology it is necessary to prove ISIS wrong on all counts. France – or any nation which believes in its own future – must show strength, not weakness. It must have confidence in its cultural and spiritual identity. It must be willing to fight for its survival. It must show that it believes in itself enough to fight for its future. It must defend its borders. It must act like someone who intends to win an interminably long war against an implacable foe.

There is a great deal Europe could have done to avert this catastrophe, which ISIS has declared is ‘just the beginning’. It could, long ago, have demanded that Islam renounce its love affair with conquest and dominance. It could have encouraged Muslims to follow a path of self-criticism leading to peace.  Instead the elites of Europe embarked on decades of religiously illiterate appeasement and denialism.

There is still much that can be done. European armies could inflict catastrophic military failure upon ISIS as a counter-argument to its theology of success. This will not eradicate jihadism, nor bring peace in the Middle East, but it would make the supremacist claims of ISIS less credible and hurt its recruitment.

Europe also needs to act to suppress incitement of jihadi ideology by its clients, including the jihadism of the Palestinian Authority. It must put more pressure on the militarily vulnerable Gulf states to stop funding radicalism throughout the Middle East and exporting jihad-revering versions of Islamic theology throughout the whole world.

For Europe, the challenge within will be more enduring and intractable than the challenge without.  A 2014 opinion poll found that among all French 18-24 year olds, the Islamic State had an approval rating of 27%.  While many of the millions of war-weary Muslims now seeking asylum in the west will have had enough of jihad, it seems likely that Muslim communities already established in the west may be the last to challenge Islam’s supremacist take on history, because they have not had to suffer first-hand the harsh realities of life under Islamist dystopias such as ISIS and the Iranian Revolution.

Nevertheless, European states could still do much in their own backyard. They could ban Saudi and other Middle Eastern funding to Islamic organisations, including mosques. They could stop appeasing Islamists in their midst. They could, even at this late hour, insist that the large and rapidly growing Muslim communities now well-established across Europe engage in constructive self-criticism of their religion, for the sake of peace.  If this fails then according to ISIS’s jihadi mindset the alternatives are conversion, surrender, or death.