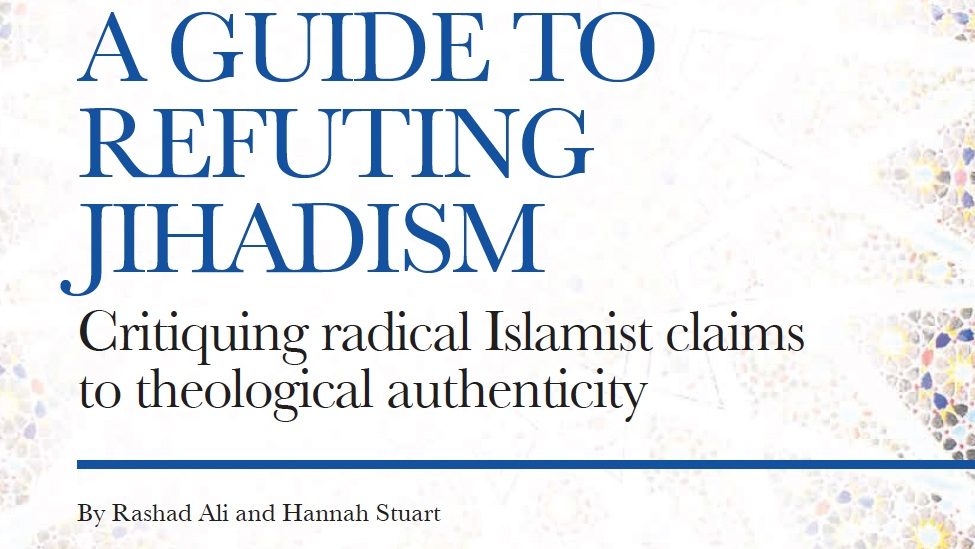 The Henry Jackson Society had just launched a guide to rejecting jihadi theologies in Islam, A Guide to Refuting Jihadism by Rashad Ali and Hannah Stuart.  There are also forewords by two Sheikhs, including one from Al-Azhar University, and endorsements from other Muslim leaders.

Although the appearance of this guide as a welcome acknowledgement that jihadi violence is theologically motivated, its use of Islamic sources is flawed and unconvincing, and there are risks for secular governments in embracing its arguments.

It is good that the theological motivations for jihadi movements are being acknowledged and engaged with by peaceable Muslims.

This is not a new strategy.  It is necessary and the strategy has long been used by authorities as a counter to jihadi movements.  For example the British empire extracted fatwas from Mecca and Istanbul in the 19th century to declare that British India was not ‘Dar al-Harb’ [House of War], but Dar al-Islam [House of Islam]’, which meant that it was forbidden for Muslims to engage in insurgencies against the British.  Muslim leaders have always asked their scholars to produce such rulings to counter violent rebellions.  This is also a traditional Islamic technique for controlling the undeniable tendency that Islamic theology has to generate violent rebel movements.

This project is also helpful because it acknowledges what is often denied – that the credibility of radical jihadism relies upon religious, theological claims.  It claims Islamic legitimacy and uses this to gain converts.  It is true that to counter this religious legitimacy it is necessary to use theological arguments.

However there are some dangers here for Western governments.  One is that there will be a cost to adopting theological positions on Islam.  Is a secular state really in a position to make an announcement that one particular form of Islam is ‘correct’ over others? This is like saying that catholicism is correct, but the baptist faith is not.  And if the state does canonize a “theologically correct” view on Islam, would it really be persuasive to the minds of young radically inclined Muslims that a secular government is teaching Islam to them, or would it just incite suspicion, and detract from the credibility of voices of moderation within the Muslim community?  Also where does combating radicalism start and promoting Islam start? (The Al-Azar Sheikh in his introduction [in Arabic] to the report sees the report as an exercise in spreading Islam, not just in combating radicalism.)

The great weakness in the arguments offered is that they appear to be opportunistic and often ignore conflicting evidence. For example on the subject of suicide bombing, a wide range of modern Muslim scholars have endorsed martyrdom operations against Israel.  It is not just al-Qaradawi or Al-Qaida ideologues who say this: senior respected contemporary jurists such as the Syrian jurist Al-Bouti have endorsed these attacks. To counter this tactic a more whole-hearted acknowledgement is needed of the full weight of Islamic voices which have endorsed it.

There is also a tendency to cherry pick texts.  For example Al-Ghazali is cited to support an argument against killing women and children, but his justification of collateral damage against civilians is ignored:

‘[O]ne must go on jihad at least once a year… one may use a catapult against them when they are in a fortress, even if among them are women and children. One may set fire to them and/or drown them.’

Another example is the discussion of ‘perfidy’ or ‘subterfuge’ in warfare.  It is claimed on the basis of a hadith from the collection of Sahih Muslim that Islam forbids the use of deception in warfare, a key point in the theology of the suicide attacks often referred to as ‘martyrdom operations’.  However the hadith is cited from a secondary source, and the translation is not accurate.  The actual Arabic in Sahih Muslim (translated more accurately here) forbids stealing booty and says that a Muslim is not supposed to break his ‘pledge’, so this is not about deception in warfare in general.  The authors also have ignored a very well-known hadith of Muhammad in which he said, ‘War is deceit’.   This approach sets up a straw man – a weakly argued jihadi position – only to knock it down. In Islam, support for deception in warfare is more resistant to re-analysis than this.

In the discussion on citizenship – which is a very important issue in Islamic law: can Muslims be loyal citizens? – the authors overlook important rulings collected by the International Fiqh Academy on this issue, which go against their position.

Furthermore, in discussions on the treatment of non-combatants, the authors ignore Muhammad’s command for several hundred non-combatant Jewish men from the Qurayza tribe to be beheaded after they surrendered to him unconditionally.  For radically inclined Muslims, Muhammad’s example would trump the musings of medieval theologians.

One of the problems with citing arguments from later jurists and commentators, which is the preferred approach of the Guide’s authors, is that most jihadis’ theology is Salafist, and as such it looks to the early sources on Islam – the Qur’an, the example of Muhammad and the testimony of the companions of Muhammad – to construct their war theologies.  Such people will not be persuaded by arguments based on later interpreters, which appears to be the main polemical tactic of this Guide.

Of course, as soon as one raises such objections, one runs the risk of being accused of supporting the jihadis.  Nevertheless, the fact is that the radical jihadis have more support than this document would acknowledge, especially in the canonical sources, and the arguments used against them would convince few.  Would these arguments be convincing to a well-trained Muslim scholar? I think not.

The strongest Islamic argument of all against jihadi theology is the ‘necessity’ argument: that it will harm Islam by causing its reputation to be destroyed among Muslims, and incite infidels to attack Muslims.  We are seeing such arguments being presented these days across the Middle East. General Sisi is being applauded in Egypt for ‘saving’ the reputation of Islam from the Muslim Brotherhood.  This argument is not based upon an appeal to theological legitimacy of specific positions, but pragmatic necessity, and what is in the best interests of the Muslim community.  Of course this argument would not have any traction at all if the militaries of Islamic states had the power to challenge those of non-Muslim countries.  Then it would probably be in the best interests of the Muslim world to pursue war.  The argument only works if it is not in Muslims’ interests to be at war.

What about the Al-Azhar Sheikh’s support?  This is political.  In the current political climate Al-Azhar must support the anti-jihadi cause.  The Brotherhood are being killed and wiped out due to their violent theologies.  The wind is blowing against the jihadi position.  It is significant that the Sheikh does not endorse specific arguments of the book – I suspect he knows better – but only the general intention of the project.

Works like this guide can back-fire.  On the one hand they acknowledge that the problem of jihadi violence is theological.  On the other hand, through the use of weak arguments relying on cherry-picked sources, they run the risk of validating the radicals’ position even more.  Perhaps their real function is to ‘save Islam’ in the eyes of moderately inclined Muslims and theologically illiterate secular people, who have an ideological preference  to embrace the narrative that the jihadis have ‘hijacked’ Islam.

But will this help to defuse Islamic jihadism?  I doubt it.