Sheikh Al-Bouti dies by the means he promoted 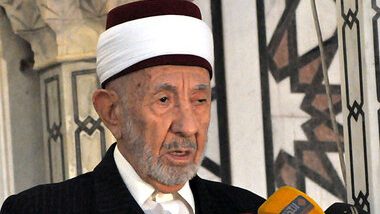 25 Mar Sheikh Al-Bouti dies by the means he promoted

Posted at 11:33h in Understanding Islam by Mark Durie 0 Comments

On March 21 2013, Sheikh Dr Mohamed Said Ramadan Al-Bouti of Syria was killed, along with 40 others, by a suicide bomber at the Iman mosque in Damascus.

A 2009 publication edited by John Esposito and Ibrahim Kalin listed the 500 most influential Muslims in the world. Al-Bouti was no. 23.  He was Imam of the Ummayyad Mosque and Dean of the Department of Religion at Damascus University, where he had taught Islam for more than half a century. Aged in his eighties, Al-Bouti was regarded as one of the eminent Sunni jurists of the modern era.

Al-Bouti had long been a critic of Salafists and the Muslim Brotherhood.  More recently, the Brotherhood’s spiritual leader Sheikh Yusuf Al-Qaradawy has been fanning the flames of unrest across the Middle East, reaching millions of viewers on Al-Jazeera.  When asked the question on Al-Jazeera TV,  “Is it permissible to target those who support the [Syrian] regime, especially government scholars?” Al- Qaradawy replied: “We should fight to kill all those who work for the government, whether civilians, army, scholars, or ignorant.”  Al-Qaradawy has also mocked Al-Bouti (here – link is no longer live), called him a mad imbecile (here) and threatened him with Allah’s wrath and people’s anger if he did not repent.

Also stirring the pot from the safety of Saudi Arabia has been Adnan al-Aroor, an exiled Syrian Sunni cleric, who has cursed Al-Bouti and called for his death.

The loss of Al-Bouti will be sorely felt by the Assad regime.  Well-known for his opposition to revolution, he was the most senior Sunni cleric who still supported Assad.

Al-Bouti’s support was consistent with a sharia principle which states that it is unlawful for Muslims to revolt and take up arms against their Muslim ruler, even if he is unjust.  Most scholars agree that this is forbidden.  Ibn Taymiyyah made the famous comment that ‘sixty years under an oppressive ruler are better than one night without any ruler.’

“The best among your rulers are those whom you love and they love you in turn, those who pray (make supplication) for you and you pray for them. The worst of your rulers are those whom you hate and they hate you in turn, and you curse them and they curse you.”
Someone asked: “O Messenger of Allah! Shall we confront them with swords?”
The Prophet (peace be upon him) said: “No, as long as they hold prayers among you (i.e. as long as the ruler is a Muslim). If you see from your rulers what you hate, hate the action they do but do not rebel against them.”  (Sahih Muslim)

In order for Muslims to rebel, the ruler should first be declared to be a kaffir ‘unbeliever’ who has abandoned Islam.  Declaring Muslims to be kaffir is known as the practice of takfir. There have been many takfir rulings against President Assad and his supporters in recent times to justify fighting and killing them (for example these two rulings against Assad and Alawites on a Salafist website).

It is not surprising that in a statement released after Al-Bouti’s death, President Assad, after declaring Al-Bouti to be a martyr, pledged to continue to work to eliminate ‘takfiri thinking’.

In recent years there have been concerted efforts by leading Muslim scholars to suppress the practice of takfir, notably the Amman Message, sponsored by King Abdullah of Jordan and signed by over 500 leading Muslim scholars, including Al-Bouti and Al-Qaradawy. Nevertheless many Muslims accept the use of takfir against apostates from Islam, against groups regarded as heretical such as the Ahmadis, and against those who, like Salman Rushdie, are considered to be blasphemers.

Islam has a long doctrinal tradition of warfare – the institution of jihad – which offers Paradise to those who die fighting. Indeed in Islam, all warfare should be religious, because it is forbidden to wage war without a religious mandate.

The principle of Islamic law that Muslims should not take up arms against Muslim rulers is pragmatic.  It helps protect Islamic societies from being torn apart by sectarian conflict.  The dogma of jihad and practice of takfir, if invoked by competing parties in a conflict, can produce extraordinary devastation, as was witnessed in the Iran-Iraq war, in which there were more than a million ‘martyrs’. It was on such grounds that Al-Bouti supported Assad – and opposed the more radical takfiri Muslims, who now constitute the opposition forces in Syria.

His distaste for armed rebellion notwithstanding, Al-Bouti was a theological conservative who endorsed the classical principles of Islamic jihad.  In Fiqh Al-Sira (‘Jurisprudence of the Life of Muhammad’) he defined the doctrine of jihad to consist of the duty of Muslims to impose Islamic government on the world if they have sufficient military force. In support of this principle he cited Sura 9:123:

“O ye who believe! Fight those of the disbelievers who are near to you, and let them find harshness in you, and know that Allah is with those who keep their duty (unto Him).”

as well as the words of Muhammad:

Al-Bouti also taught that atheists, idolaters and polytheists could be fought against, to compel them into Islam, while Christians and Jews could be permitted to live alongside Muslims provided they submit to sharia law and pay tribute to the Islamic authorities.  He pooh-poohed the distinction often made between offensive and defensive jihad:

“It is nonsense to want to distinguish the two aspects of defensive and offensive warfare in the struggle for the cause of Allah.  The legitimacy of jihad does not depend upon the right of attack or defense as such; it is based upon the necessity of establishing an Islamic society which follows the laws and principles of Islam, irrespective of how one pursues jihad towards this end, whether offensive or defensive.” (Fiqh Al-Sira, from the French translation of Z. Diab, pp. 187-188).

Like many other leading Muslim scholars, Al-Bouti issued a fatwa endorsing ‘martyrdom operations’ — suicide bombings — in Israel.  This fatwa was cited by Nawaf Hayel Al-Takrouri in Martyrdom Operations in Islamic Jurisprudence (al-Amaliyat al-Istishhadiyya fi Mizan al-Fiqhi) along with 31 other similar rulings:

Then he [Prof. Al Bouti] gave an illustration.  He said:

“A man says, ‘Since I am tired of life, I am going to carry out a [martyrdom] operation.’ This [person] would be committing suicide.

Someone else says, ‘I am pursuing jihad in the cause of Allah to strike the enemy. If I die, that is good; if I don’t die, that is better.’ This [person] will be a martyr, Allah willing. Furthermore, this an act of vengeance.”

It is a bitter irony that this respected scholar was killed at the end of a long and productive life by someone who was acting out the very belief he had promoted against Israelis: that a Muslim who blows himself up to inflict defeat upon ‘the enemy’ has not committed suicide, but is a martyr enjoying the delights of paradise, provided his intentions are ‘good’.

Muslim armies down the centuries have found the doctrine of jihad to be a potent weapon against their non-Muslim foes. However bellicose dogmas, which even ‘moderate’ Muslims, such as Al-Bouti espouse, have the capacity to tear societies apart in a bloodbath if conditions for their implementation are triggered. The recent slaughter of 41 civilians in the Iman mosque in Damascus was but a microcosm of the larger theologically-driven tragedy which is engulfing Syria, and threatens to make mince-meat of much of the Middle East. For too long Arab states have tolerated and even invested heavily in the promotion of jihadist dogma in their societies.  Those who stoke the fires of jihad better watch out for the blowback.

This article was first published by frontpagemag.com.