The Dhimma Returns to Syria 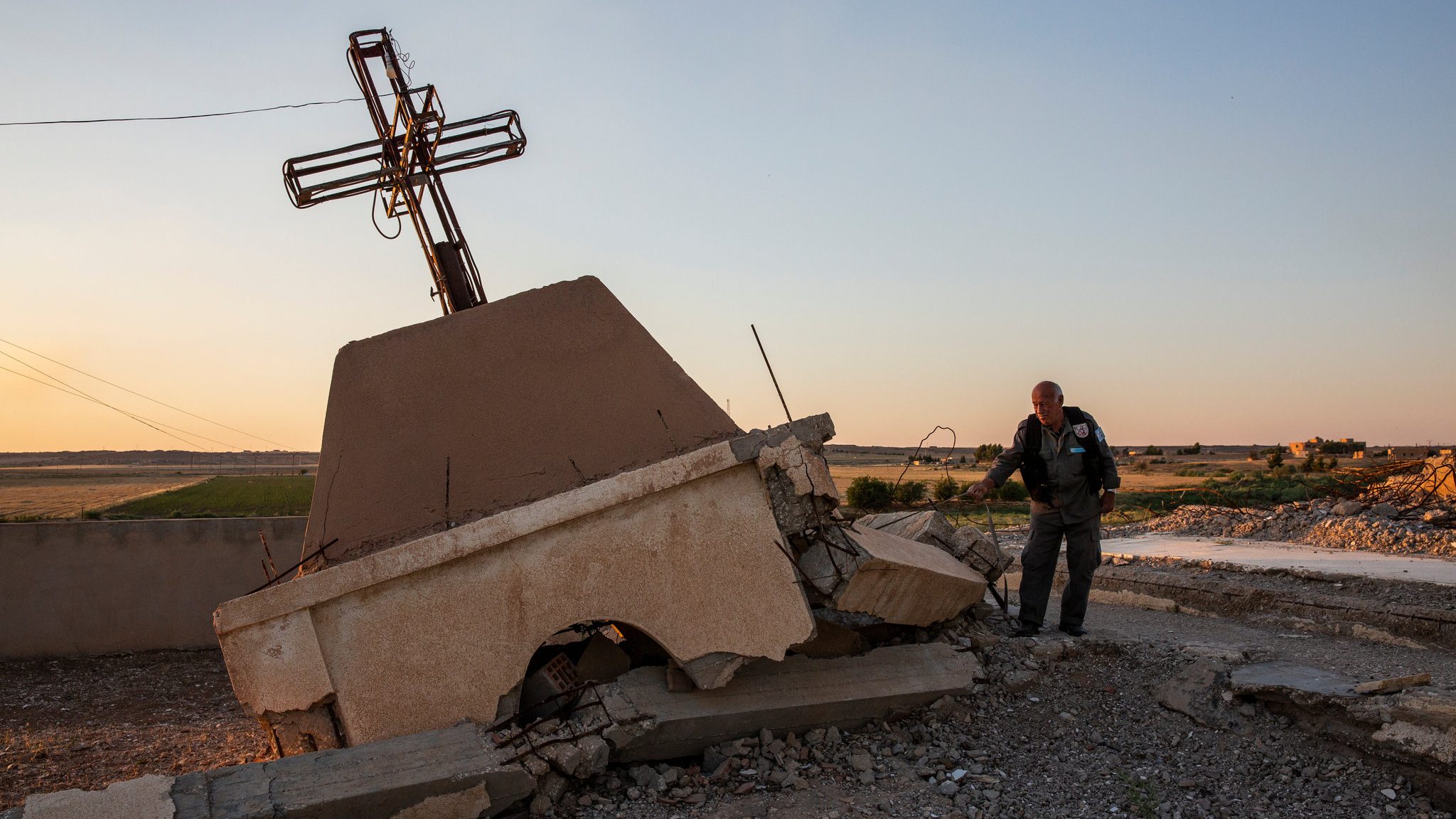 Posted at 09:46h in Understanding Islam by Mark Durie 0 Comments

The following report comes from Martin Janssen in Amman, Jordan (original in Dutch). The preceding notes and translation from Dutch into English are by Dr. Mark Durie, an Anglican vicar in Melbourne, Australia, author of The Third Choice, and an Associate Fellow at the Middle East Forum.

In his report Janssen tells of his experience of a prayer walk in Amman, held on May 21 2013 for the two abducted Syrian clergy, Greek Orthodox Archbishop Paul Yazigi and Syriac Orthodox Archbishop Yohanna Ibrahim.  These Archbishops have been captured by Syrian rebels.

After the prayer walk Janssen had the opportunity to meet with Syrian Christian refugees, who told him how they came to flee their homes and villages.  Their village was occupied by rebel forces, who proceeded to announce that they were now under an Islamic emirate, and were subject to sharia law.

1. renounce the ‘idolatry’ of Christianity and convert to Islam;
2. pay a heavy tribute to the Muslims for the privilege of keeping their heads and their Christian faith (this tribute is known as jizya);
3. be killed;
4. flee for their lives, leaving all their belongings behind.

Some Christians were killed, some fled, some tried to pay the jizya and found it too heavy a burden to bear after the rebels kept increasing the amount they had to pay,  and some were unable to flee or pay, so they converted to Islam to save themselves.

The scenario reported by Syrian refugees is a re-enactment of the historic fate of Christians across the Middle East.  The Muslim historian Al-Tabari reported that when the Caliph ‘Umar conquered Syria, he gave the following command to his armies:

“Summon the [conquered] people to Allah; those who respond unto your call, accept it [their conversion to Islam] from them, but those who refuse must pay the jizya out of humiliation and lowliness. If they refuse this, it is the sword without leniency.”

“Fight against such of those who have been given the Scripture as believe not in Allah nor the Last Day, and forbid not that which Allah hath forbidden by His messenger, and follow not the Religion of Truth, until they pay the jizya readily, being brought low.”

This policy of subjugating Christians under the yoke of jizya taxation was also based upon the teaching of Muhammad who said:

“Fight in the name of Allah and in the way of Allah.
Fight against those who disbelieve in Allah. Make a holy war …
When you meet your enemies who are polytheists,
invite them to three courses of action.
if they respond to any one of these, you also accept it and withhold
yourself from doing them any harm.
Invite them to (accept) Islam;
if they respond to you, accept it from them
and desist from fighting against them ….
If they refuse to accept Islam, demand from them the jizya.
If they agree to pay, accept it from them and hold off your hands.
If they refuse to pay the tax, seek Allah’s help and fight them.”
(Sahih Muslim. The Book of Jihad and Expedition. [Kitab al-Jihad wa’l-Siyar])

Classical Islamic law mandates that ‘People of the Book’ should be given three choices, however the Syrian rebels are augmenting this with the fourth option of allowing them to flee.

In Islamic law, Christians who accept to pay the jizya in order to keep their faith – and their head – are known as dhimmis.For a full explanation of the Islamic doctrine of the three choices, including the psychological meaning of the jizya tribute, see The Third Choice especially Chapter 6: The Dhimma: Doctrine and History).

It is a matter of deep concern that European states and the US are assisting the Syrian rebels as they implement this Islamic ‘emirate’, which includes the restoration of the dhimma system by re-enacting the conditions of jihad conquest against Christians.

A conversation with Syrian refugees in Amman

Last Tuesday, May 21 a prayer walk was held in the Jordanian capital Amman around nightfall.  Its purpose was to inquire after the unknown fate of the two Syrian bishops who were kidnapped over a month ago.  I had agreed with some members of the congregation where I always worship to take part and traveled there with them. During the journey I was brought into contact with a Syrian priest from Aleppo who after the journey was concluded introduced me to a group of Syrian Christian refugees. The priest suggested that we all spend the rest of the evening together so that as a correspondent from Europe I could listen to the stories and testimonies of these Syrians.

Syrian refugees of all religious backgrounds – not just Christians – do not feel at ease in neighboring countries such as Lebanon and Jordan. They get the very strong impression that they are not welcome and that the open hostility of the local population towards them is growing. In Jordan, for example, some parliamentarians have been calling on the government for months to expell all Syrian refugees from the country because they pose a security risk. The problem is that this accusation contains an kernel of truth. Our evening discussion group of 12 people included some Jordanian Christians. They reported that a few weeks early the Jordanian security services had managed to thwart an assassination attempt on Abdullah, the Jordanian monarch. This attack was planned and orchestrated by a sleeper cell of the Syrian, al-Qaida affiliated, Jabhat al-Nusra movement. It was precisely to escape such radical Islamic movements that Syrian Christians have fled to Jordan.

My interlocutors this evening were almost all from northern Syria. They came from Idlib, Aleppo and villages in the countryside between the two cities. Their testimony was unanimous. Many of these villages had a large Christian presence until a few years ago, but now Christians no longer lived there. Jamil, an elderly man, told the following story during which other attendees began to nod violently in agreement. They appeared to have experienced exactly the same things.

Jamil lived in a village near Idlib where 30 Christian families had always lived peacefully alongside some 200 Sunni families. That changed dramatically in the summer of 2012. One Friday trucks appeared in the village with heavily armed and bearded strangers who did not know anyone in the village. They began to drive through the village with a loud speaker broadcasting the message that their village was now part of an Islamic emirate and Muslim women were henceforth to dress in accordance with the provisions of the Islamic Sharia. Christians were given four choices. They could convert to Islam and renounce their “idolatry”. If they refused they were allowed to remain on condition that they pay the jizya. This is a special tax that non-Muslims under Islamic law must pay for “protection”. For Christians who refused there remained two choices: they could leave behind all their property or they would be slain. The word that was used for the latter in Arabic (dhabaha) refers to the ritual slaughter of sacrificial animals [MD: i.e. by cutting the throat].

Miryam, an Armenian middle-aged woman from Aleppo, made the biggest impression on me. A common thread running through all the stories from different places in northern Syria during this evening was the constant complaint that armed militias looted and plundered. From wheat, bread and diesel in the villages to the complete inventory of schools, businesses and factories in Aleppo. Factory owners who protested were executed without mercy. Miryam said acquaintances who fled to Turkey learned that members of these armed militias were selling this “war booty” at bargain basement prices in Turkey. Miryam looked at me thoughtfully and said something which remained constantly with me over the following days. She told me that she had learned last year that a human being has a tremendous ability to adapt to the most difficult conditions. They had to learn to live in Aleppo without water or food, and sometimes no electricity for days on end. They even had to learn to live with the sounds of explosives and gunfire that tore them from sleep at night.

However, what a man cannot live with is the constant terror that paralyzes him completely:  the daily fear that the bus transporting children to their school would be targeted by a suicide attack; the psychological fear that comes over you on Sunday when you go to church knowing there are groups active in your neighborhood who consider it a religious duty to kill as many Christians as possible; and finally the situation that at night you do not dare to go to bed because you have received reports about acquaintances and relatives who were surprised by a rocket that crashed out of nowhere onto their property while they slept; or what can happen when you spend hours in a long line at one of the few bakeries that still make bread. Indeed Miryam told me that she never could have imagined that even the simplest of life’s activities had suddenly become dangerous.

At the end of the night I struggled inwardly with a question that I did not dare to express but which I finally found the courage to utter. What next? What did these Syrian refugees have to say about their own future and that of Christianity in Syria? Later I realized that in fact no one answered this question. The Armenian Miryam said she was thinking of emigrating with her family to Armenia, while Jamil talked about relatives who lived in Sweden.  Perhaps their answer to my question lay hidden in these comments.

Just after midnight I drove home with the members of my church from Amman. Everyone was silent and seemed lost in thought. I was to be dropped off at the church. This church sits on a hill which was once almost always enchantingly lit, but I had  noticed recently that this was no longer the case. While getting out of the car I asked about the reason and was told that “there were people who had taken offense”. I also saw three young men quasi-nonchalantly keeping watch at the church.  When I asked if this was necessary, the short reply I got was “Yes.”

This report was originally published by the Religious Freedom Coalition.